THIS JUST OUT: Mario's-despicable-Michael-Jackson-All-Stars edition

Let me say this right off the bat: I am not a Jacksonologist, a Jacksonophile nor a Jacksonian Democrat.*

I am a reader of English words who can, at times, even comprehend the squiggly characters processed by my brain. The press release accompanying the album's release, which promises fans "mind-blowing insight into how this artist worked and a chance to hear the songs he most recently created along with tracks Michael had a desire to bring to fruition," leaves out one very important important detail: Dude's dead. That means, even if he really wanted to bring some tracks to fruition, he didn't (because he's dead), and he also did not release the other "most recently created" tracks (because he's dead). Like him or lump him, you cannot argue that Michael Jackson did not release these tracks.

But demise, timely or otherwise, has never stopped recording artists from releasing tracks. Heck, Selena has released almost twice as many albums posthumously as she did when she was alive. Of course, when your biggest asset as a recording artist was (according to Quincy Jones) being a workaholic who wouldn't let any tracks go until you were absolutely convinced it was finished, well, it doesn't bode well for the quality of your post-death releases.

Then again, a guy who sold 35 million albums in the 12 months after his death probably doesn't have to worry too much about sales of any posthumous records. Well, at least his label doesn't, anyway. His legacy is a whole different story.

DVDs
Despicable Me
I still like this movie. It's a got a great cast (Steve Carrell, Kristen Wiig and Jason Segal), a mildly imaginative setting and three impossibly adorable orphans. It's got the requisite animated slapstick humor, a few humorous asides and plenty of exaggerations for the effect of comedy. It's even got a heart at the center of the story — sort of.
The one knock most people have on non-Pixar animated movies is that they lack a warmth, or genuine connection. Dreamworks is getting better at it (Over the Hedge and Flushed Away are great), but they seem to have backslid since they tried for the big kahuna with Bee Movie.
The problem with Despicable Me is the manner in which the transformation of Gru (Carrell) is handled. It's literally the linchpin to the whole plot: His overcoming his nebulous, unarticulated interpersonal relationship problems (it's implied that this had to do with a lack of affection from his mother, but this goes way beyond) is what drives the entire second half of the movie. The bulk of this miraculous transformation occurs over the course of a theme park montage that takes about two minutes. And, like most movies that attempt to tack on an emotional storyline, it feels hollow. Carrell and the aforementioned adorable children do have the requisite diabetes-inducing sweetness necessary for their "scenes" together, but there's no actual connection. The climactic scene, wherein Gru has to ask the eldest to trust him, is missing one thing: Any reason at all why she should.
All that said, it's not a bad movie (and certainly better than recent Dreamworks abominations, like Bee Movie or the majority of Shreks.). It's just not all that it could be. I wouldn't call it despicable; rather, just lamentable.
click to enlarge 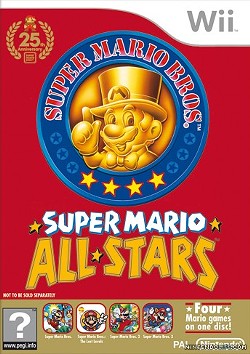 VIDEOGAMES
Super Mario All-Stars Nintendo gussies up a bunch of 20-year-old games with a fancy red-and-crappy-tarnished-gold box, a soundtrack CD, a 32-page "book" on the history of Mario, and a $30 price tag.


It's less than super. Especially when you could buy all of them, individually, on the Virtual Console for 2,000 points (where 2,000 point cards sell at retailers for $20).

The book, while it contains a few level designs and notes from Shigeru Miyamoto himself, is boring. And the "soundtrack" CD includes only 10 songs (the names of which are in the original Japanese, just to ensure you have no idea what you're playing) and 10 sound effects. (Because it's so hard to download "small Mario jump" as a ringtone...)

There are a few level designs and notes from Shigeru Miyamoto in the book, but it certainly doesn't carry any of the festive atmosphere that apparently went into creating it — "the way everyone came together to work on this was like a party," says the general manager of Nintendo's Entertainment Analysis and Development Division Software Development Department. Then again, the NEADDSDD's parties might be something less than the swinging affairs I'm picturing after passing out trying to pronounce its name in one breath.

* That is, I prefer appointed judges rather than elected ones and a far weaker executive branch.
** How on earth can you fit 115 stitches on someobody's face? How is there even enough skin left to justify that many stitches?
*** Clearly, this would be a country song.