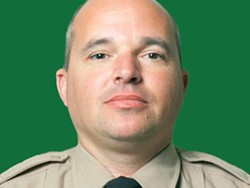 Five months after a Spokane sheriff's deputy shot and killed a 74-year-old Spokane Valley man, county prosecutor Steve Tucker ruled today that there was no evidence of a crime — a decision most people had expected from Day One.

Because the deputy involved, Brian Hirzel (pictured), had indicated he feared for his life before shooting Wayne Scott Creach, and because there were no other witnesses to the shooting, Tucker had said in recent interviews that he had few options when considering charges. In a press release issued earlier today, he cited the state's criminal code: “A public officer shall not be held criminally liable for using deadly force without malice and with a good faith belief that such act is justifiable.”

Before issuing the press release, Tucker met with the Creach family to discuss his decision. The family has hired an investigator of its own to look into the shooting and has often questioned the quality and timeliness of the shooting investigation.

The night of the shooting, Wayne Scott Creach had gone outside to check on a suspicious vehicle in the parking lot of his family nursery,the Plant Farm, in Spokane Valley.

Deputy Hirzel was inside an unmarked cruiser as Creachapproached. According to Hirzel, this is what happened next: Creachrefused commands to put the gun down but eventually tucked it in hisback waistband. Hirzel got out of his car with his gun drawn, orderedCreach to the ground and, when Creach refused, struck his legs with abaton. And then, the deputy says, Creach reached for his gun, and thedeputy fired.

Tucker, who faced a Democratic challenger in theNovember election, had said in September that he would make a decisionbefore voters went to the polls.

Now, Sheriff Ozzie Knezovich will convene a shooting-review board, an internal investigation, and a citizen review board to examine the case and determine whether policies were violated and whether training should be amended in light of the fatal shooting.