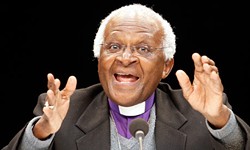 Gonzaga University, like many religious academic institutions, see-saws in perpetual tension between its Catholic tradition and its broadacademic focus. Is it okay for the school to perform the VaginaMonologues? Have a pro-life clubon campus? Havea non-Jesuit president?

If you thought the selection of Archbishop DesmondTutu (Nobel peace laureate, apartheid-toppler, preacher against injusticeand for forgiveness) commencement speaker, would avoid that sort of tension,apparently, you thought wrong.

Now, Tutu’s the subject of a critical petition from a few Gonzaga alumni.

First came a blog from the Cardinal Newman Society – a group with the goal to“help renew and strengthen Catholic identity in Catholic higher education” –which takes this angle on the story: “Gonzagato Honor Pro-Abortion Rights Archbishop Desmond Tutu”

The specific problem they have with Tutu: “Archbishop Tutu earned the 1984Nobel Peace Prize for his efforts to subdue violence in racially torn SouthAfrica during apartheid. But as admirable as that work has been, Tutu also endorsed a constitutionalamendment in South Africa to legalize abortion and evenendorsed the work of the abortion chain Marie Stopes. “

To the Cardinal Newman Society, it’s a violation of a bishop’s directivestating that “Catholic institutions should not honor those who act in defianceof our fundamental moral principles.”

“As alumni, faculty, staff, students and other friends of Gonzaga University,we are deeply troubled that Anglican Archbishop Desmond Tutu will give the 2012commencement address and be honored with an honorary Doctor of Lawsdegree,” they write. “If this occurs on May 13 as has been announced, it willmark a sad day in Gonzaga’s history.”

Patrick Kirby says this has been in discussion among local Catholic, on theinternet and over e-mail for some time. Now they have launched a campaign, upsetover Tutu’s support for abortion, gay-rights, and critiques of Israel. He sayshis petition has some support among a few members of Gonzaga’s faculty andstaff, though the didn’t feel comfortable naming who they were.

“Just because he has a Nobel peace prize doesn’t give him a license for aninvitation to speak at a Catholic university,” Kirby says over the phone today.“It’s shocking. It’s offensive. It’s stupid.”

Representatives from Gonzaga did not immediately return phone calls requestfor a comment.

The petition has received national traction, not only being written up by theCardinal Newman Society, but being tweeted by @AmericanPapist, a conservativeCatholic blogger with over 10,000 twitter followers.

Thursday music: To Sweat? Or not to Sweat?