CAT FRIDAY: Cats who should be in the Olympics

With nearly one week of the 2012 London Olympics in the record books, we decided that today's Cat Friday post should be focused on the Games, which so far are going very well for many members of Team USA. That said, these cats all look like they're good enough in their respective sports that they could start their own Olympic team!

The Russian gymnasts got nothin' on this high-flying, flipping kitty.

This kitty could knock out any opponent in karate.

Way to go for this kitty - he already took home the gold! He's a member of the road cycling team. Cats are excellent cyclists. 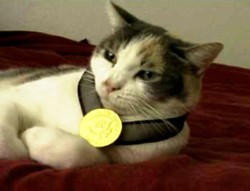 Ping pong cat is going to blow away his fans with his quick moves on the table, and probably will also really intimidate his competitors with that mean glare.

This cat is famous for his goal-keeping skills in soccer. The other teams won't stand a chance of scoring against him!

This tiny kitten prefers to get on the field and play with humans instead of other cats. His small size is an advantage in the game since he can quickly weave in and out between opponents legs. 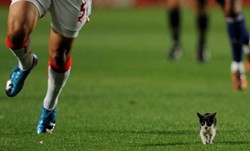 This kitty has style in and out of the pool as well as a great stroke.

We can't forget to recognize the amazing members of the kitty volleyball team. Their spikes are lethal!

TONIGHT: Up on the Roof - A Taste of Unity