An even harder beer to find in Spokane 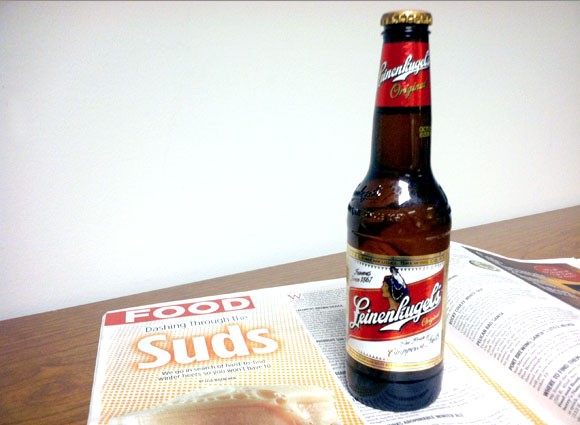 The best kind of visitor stopped by the Inlander office today: a visitor bearing beer.

Don Walsdorf came by this afternoon to bring me a bottle of Leinenkugel's Original. He'd read my story about less-common regional seasonals and wanted to make sure I'd tried this "real beer."

If you do most of your beer-drinking in the Inland Northwest, you probably haven't. The "Leinie" is a very popular beer with a long tradition in the Upper Midwest, but Walsdorf has been trying to find it in Spokane for years with no luck.

He grew up near Chippewa Falls, Wisc., where the Leinenkugel Brewing Co. has been brewing beer for generations. His grandfather was a distributor, so he got to ride around in the truck and drink all the soda he wanted.

Walsdorf points out that it's been brewed there since 1867, as the label says — back when Washington and Idaho were barely territories. Wisconsin may have its beer reputation tied with PBR and Miller Lite, but that state takes beer very seriously. I grew up in neighboring Minnesota, and Wisconsin was known as the place where kids could drink a beer at the bar with their parents so long as Mom or Dad said it was fine.

So where'd this bottle come from? On a recent road trip, Walsdorf's son took a detour to the Minnesota border so he could pick up a few cases to bring back. I wouldn't blame Mr. Walsdorf if he didn't want to share, but I am very appreciative that he did.

HAPPY MONDAY: Giving love to who needs it most

MORNING BRIEF: taxes, Wal-Mart and going back to school in Newtown