Spokane Tully's shops to get a new name (and beans) 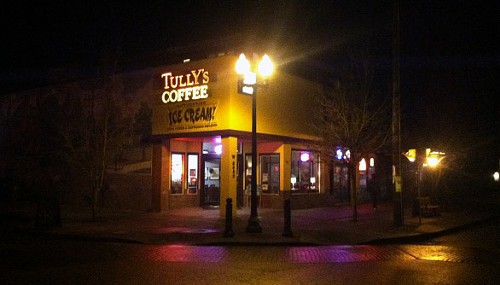 Lisa Waananen
The Tully's sign still glows in Browne's Addition on Thursday night, but not for much longer.

Bid farewell to Tully’s, because Spokane’s two locations are getting a new name — Caffe Capri.

Spokane’s shops — one in Browne’s Addition and one on the South Hill on 29th — will change over this coming week. Two other stores, in Yakima and Hayden, already made the switch from Tully’s to Caffe Capri earlier this month. Tully’s has been having some financial troubles, as you may recall, so Tawney decided to take the opportunity to rebrand his stores.

It’s not just the name — the coffee will also be completely different, coming from Seattle-based Caffe D’arte, which uses an authentic Italian roasting style and licenses stores under the Caffe Capri brand. A few Tully’s shops in Boise made a similar switch last year.

The rebranded store in Hayden, featured on its new Facebook page.

The company merges the American Starbucks-style espresso bar with “a more patient European style,” Tawney says. He wasn’t sure how hurried customers would react to that, but so far they’ve been pleased at the Yakima and Hayden locations.

“It’s been a really positive response,” he says.

There won’t be major remodeling, but the Browne’s Addition store will have adjusted hours next week for some new paint and other touchups. Most of that work will be done at night, so nobody’s daily coffee routine should be interrupted.

The change means they will be able to offer more specialty coffee drinks, Tawney says, like ones served in martini glasses and espresso shakes. The selection of capped beverages will also change, and they’ve already adjusted the pastry lineup.

There will still be one Tully’s in town, inside the Fred Meyer on North Division. The branded locations inside stores and other buildings are licensed in a different way than the locally owned franchises, and Tully’s Coffee spokeswoman Diane Geurts confirmed that the Fred Meyer spot will continue to be open, as a Tully’s, for the foreseeable future.

MORNING BRIEFING: gun permits, sexting and bankruptcy at the Montvale