Reading "Catch-22" on the way to Iraq: Author David Abrams at Auntie's

In 2005, after spending nearly two decades in the U.S. Army without setting foot in a combat zone, David Abrams got sent to Baghdad for 11 months. Last night he spoke at Auntie’s Bookstore about the experience and the satirical novel that came out of it, Fobbit. The title refers to the derogatory nickname for the “stay back, stay safe kind of soldiers” who don’t leave the relative safety of the forward operating base, or FOB.

Like the main character in his novel, Abrams worked in a “cubicle jungle” writing up the awful events of war as patriotic news releases for the American public. “It looks just like an ordinary day at the office,” he said.

He recently wrote an essay for The New York Times reflecting on today’s 10-year anniversary of the beginning of the Iraq war, and also contributed to a new collection of soldiers’ essay, Fire and Forget. Recently, though, he’s been working on a very different next book — his “Hollywood novel” — rescued from the desk drawer and just sent off to the publisher.

His right arm was tucked in a sling Tuesday night, and he started out explaining why: He had been helping his wife hang something up a wall last week when the ladder slipped, and he ended up breaking his humerus bone. “Which sadly means I will not be writing any funny books after this,” he joked.

He credited Percocet for his appearance, read excerpts from his book and answered questions from the audience. Here is an edited version of those questions and answers: 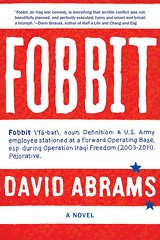 Did you find that writing the piece was therapeutic, or was it challenging to re-enter that persona that you had [while in Iraq]?

I had to read back over my journals that I kept, and that was a really painful thing. If you’ve ever kept a journal when you were a kid, like 15 or 16, and you’ve read back over them and — “Oh my god, did I really say that and think that?” — that’s kind of how it was for me going back over those.

I did have to kind of go back and explore some of where I’d been when I was in Iraq and what I thought, and try to divorce myself from that as much as possible so I could come up with new events and new characters.

Do fobbits often see combat or are they so far removed that they never see the face of war?

Well, I can tell you war is all around you over there. It’s a 360-degree everywhere war. There is no front line, there is no rear line. But you also have to remember that there are different phyla of fobbits: There are those who were like me, who were fobbits because of their job. I just kind of worked myself into a desk job and that’s what I did the entire time that I was over there.

There are those, I’m assuming, who like to be fobbits and really do kind of cower and are afraid to go out beyond the concertina wire, afraid of what will be out there — certain that they’ll find a sniper bullet in their chest the minute they step outside the gates of the FOB.

And then you have your reluctant fobbits, who are usually like staff officers, who are assigned the desk jobs but what they really want to be is [Fobbit character] Colonel Duret out there kicking terrorism’s ass. Yet, there they are, stuck in the desk job, and then they usually try to find ways to get out of their desk duty and go out on ridealongs with other patrols.

But there is a very real danger. When I was over there, we did have several mortars land inside our FOB. I never came close, I wasn’t that close in danger, but there were definitely some soldiers who were killed, like I kind of described — they were sitting there in the courtyard eating their Whoppers, and death-from-the-sky sort of thing, sadly. It can happen anywhere, anytime.

Can you comment on any comparisons to Catch-22 or Slaughterhouse-Five and how those might have, or not, influenced you?

I’d never read Catch-22 before, and I figured, I’m going to war — why not do it now? Maybe it would get my head in the right head space for this war. As it turned out, it did. So it was a very interesting, surreal experience to read Catch-22 as you’re heading into a war that I think Joseph Heller would have really loved, to be honest. He would have had a lot to say about Iraq and Afghanistan and why we’re over there.

Are you surprised by the success of this book?

I really have no basis of comparison, because I’m a debut novelist and this is my first book. I’m just kind of going along with the flow. I wrote this book, I thought maybe somebody would be interested enough to publish it. That was a fairytale moment when Grove Atlantic came back and said, ‘Yeah, we’ll publish it.’” And then I figured, OK, it will get published and there will be some noise in some bookstores for a few months and people will pay attention to it, and then I’ll sink back into semi-obscurity and a quiet life with my wife in Butte, Montana.

But, you know, the book has taken on a life of its own. As writers, we write these books and we set them out there — and it’s a cliché, but once you turn the book loose and it’s published, it’s not your book anymore. ... I’m just happy to see that people have been responding to it the way they have. I’ve been surprised, I actually have.