First off: Golden Hills Brewing is changing its name. 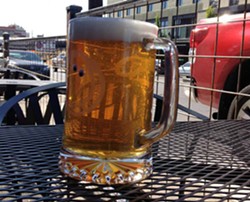 Next, it’s a good weekend for eating and drinking: The Perry District's Lantern Tap House — we wrote about their expansion not too long ago — is hosting a big party with Iron Goat Brewing Co., including the release of an India Black Ale specially brewed after folks voted last month. They’re also opening the new patio. Jones Radiator also opened a patio earlier this week.

Churchill’s Steakhouse is hosting a "Mis-steak" night this Sunday, June 9. Basically, you get top-quality steaks cut just a tiny bit too small for an hefty discount.

And don’t forget about the businesses that have found themselves a little isolated with the temporary closure of the Monroe Street Bridge: Stella’s, Milford’s, Coeur Coffee and Indaba, among others. Central Food is even offering a Detour Menu happy hour during the week.

In this week’s print issue, don’t miss the food-related interview we snuck into the news section: Idaho Sen. Mike Crapo hopes to see Idaho-made Greek yogurt in every school in America.

In this week’s Entree newsletter, read about the opening of The Silver Spoon Tea House on the South Hill and Big Table organization that supports hospitality workers. Subscribe to the weekly email newsletter here.