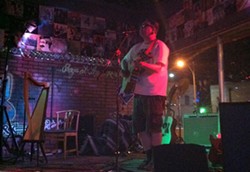 There are panties on the ceiling.

Yes, adding to the ambiance, of the across-the-street-from-Arby’s establishment, Carr’s Corner, is a whole string of brightly colored women’s underwear hanging above the bar. Friday night, I headed over there to check out the singer-songwriter Ian Miles, who had apparently undone his audience at Volume a few months ago.

Not only was it my first time infiltrating Carr’s Corner; it was my third day on the job as The Inlander’s new music editor. Unfortunately, Miles had opted to go first, meaning upon arrival at 10 pm I missed his set and Liz Rognes and her band were folking up the stage. While the crowd was sparse, those who were there didn’t want to be anywhere else.

Later Miles did a few-song encore. His work went straight to the gut.

The panties at Carr's Corner.

Next, it was off to Mootsy’s Saturday to see a few more Volume alumni work magic.

First, it’s perfect when a show doesn’t pussyfoot around and actually starts at 10, when real people want a show to start anyway. That meant it wasn’t until well after midnight when the headliners Space Movies took to the stage. Before them, Mirror Mirror and The Kitchen made the place rock so hard some folks had to leave on account of it being “too loud.”

One of Mootsy’s best features is not having an elevated stage for the band to play on, blurring the lines between fans and the band members. Here musicians can’t fake it, because the audience is essentially on top of them.

And Space Movies didn’t fake anything. The Bane-like gas mask worn by the drummer Aaron Hansen paired with the no-holds-barred guitar playing of Alex Moe (also in Mirror Mirror) perpetuated a sound unlike any other in the world.

That was just weekend one. In the coming weeks I will be checking out as many music venues as possible; experiencing it all.

Also, for anyone interested, Carr’s Corner only accepts clean underwear to proudly display on its ceiling. So next time you’re headed there, don’t forget to pack an extra pair.

Got a show Laura Johnson needs to check out? Email her at lauraj@inlander.com.

The Spokane River falls through the eyes of Instagram