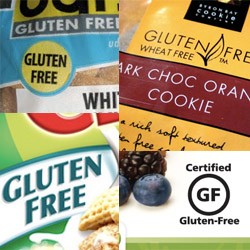 After years without an official national standard for food labels, the Federal Drug Administration announced its final definition of “gluten-free” today. The standard of 20 parts per million is no surprise — it’s in line with other international standards, and the FDA had already been floating that as the possible standard for several years.

We wrote about the gluten-free trend earlier this year, and how it’s much more than a “fad” or “craze” for people with celiac disease or gluten sensitivity. Labels and standards are critical for people with sensitivities because even small amounts of gluten — proteins naturally in wheat, rye and barley — can cause immediate sickness and more serious health problems over time.

“This standard ‘gluten-free’ definition will eliminate uncertainty about how food producers label their products and will assure people with celiac disease that foods labeled ‘gluten-free’ meet a clear standard established and enforced by FDA,” says Michael R. Taylor, deputy FDA commissioner, in an announcement.

The 20 ppm standard means products labeled “gluten-free” may actually have tiny, tiny amounts of gluten. Some groups had advocated a more strict standard, such as 10 or 5 ppm, but the general research-backed consensus is that 20 ppm is sufficiently low to not cause a reaction for most people with celiac disease. (And, the FDA points out, it is hard to reliably measure amounts smaller than that.) The World Health Organization, European Union and Canada already follow the 20 ppm standard.

Previously, without an official standard in the U.S., third-party certifications filled the gap for companies and manufacturers marketing gluten-free products. Some, like the Quality Assurance International certification, require products to meet a 10 ppm standard.

“For years, gluten-free labels have gone unregulated, putting our gluten-free community in danger,” says Alice Bast, President of National Foundation for Celiac Awareness, in a media release. “We applaud the FDA for finally publishing a standard definition of gluten-free.”

The FDA estimates that 5 percent of food currently labeled “gluten-free” does not meet the new standard. The label will also be allowed on products like bottled water or fruit that naturally don’t contain gluten. Because of frequent cross-contact between crops in the agricultural process, naturally gluten-free grains and legumes like rice, oats or lentils have to meet the 20 ppm standard to be labeled gluten-free.

The FDA doesn’t directly regulate restaurants, but “suggests” that restaurants using the gluten-free label on menus should be consistent with the standard, which is similar to recommendations for fat-free or low-cholesterol labels.