A peek at the $395 micro-apartments planned for the Ridpath 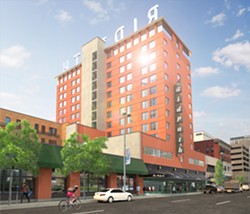 Images from Wells and Company

Despite some continuing ownership issues, Spokane developer Ron Wells is moving ahead with his plan to convert the long-troubled Ridpath Hotel into apartments. Now, via Craigslist, we’ve got some details: The Ridpath Club Apartment and Suites is planning to open June 2014, with studio and 1-bedroom apartments and a number of community amenities.

The smallest studio size is 241 square feet — presumably about the size of a hotel room — for $395 a month. (The largest suites run about $1,400.) The ad says units are filling up: “Make a reservation now to get the layout and view that you want!!” We called up Wells and Company to confirm, and they’ve got a list going of people who are interested. 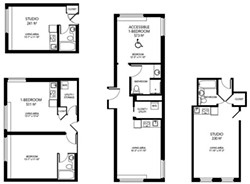 How small is that, really?

To put the size in perspective, New York City ran a contest in 2012 to design micro-apartments for a pilot program that could overturn a requirement that all new apartments be at least 400 square feet. The housing market in New York City, especially Manhattan, is notoriously tight — studio apartments routinely run at least $1,200 a month, and that’s for places nowhere near the most expensive neighborhoods. (Seriously, $1,200 would be the kind of deal New Yorkers would brag about at parties. This apartment, at 100 square feet, has been getting attention this week as New York’s “saddest.”) Mayor Mike Bloomberg championed the program, pointing out that a big percentage of Manhattanites are single and don’t need a ton of space.

More than 30 developers submitted proposals for apartment units of less than 400 square feet, and the winning building plan includes apartments ranging from 250 to 370 square feet. To make the small space work better, the living space was designed to transform for night and day use, and storage was built into an overhead compartment and deep closet.

Here are some images from the winning NYC proposal. Here’s also a video of people trying out a model apartment at the Museum of the City of New York.