Young Kwak
The Center last January as it prepared to open.
click to enlarge

Young Kwak
The Center in January when it opened.

It’s official; yet another Spokane live music venue has bit the dust. The all-ages venue The Center, has been sold, owner KC Crawford confirmed today. All upcoming shows have either been moved to new locations or canceled.

“I wasn’t able to make enough money to make it worth my while,” Crawford says.

Crawford was not forthcoming with who the new owners would be. But says he believes they will reopen the venue in a months time after a remodel as a bar/music venue.

Rumblings came last week, when it was announced last Thursday’s Red Fang show would be moved to The Hop!.

In speaking to The Center’s music promoter, Quinn Tanzer last Wednesday, he said the 500-capacity venue was closed for good. Crawford later said this was not the case and that he was trying to keep it afloat. Later that day a Facebook post claimed the place closed. The post was taken down hours later. 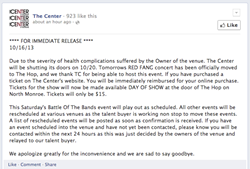 The message posted on Facebook last week, which was later deleted.

Although the Facebook post said the closing was due to the owner’s health issues, Crawford says that while he does have a broken leg, that wasn’t the case.

Crawford and Tanzer say they plan to separately continue promoting and bringing in music to the area, just not at their own location.

The venue had been open since the beginning of the year. In a preview interview with the Inlander, shortly before The Center’s opening, Tanzer admitted he had concerns about the place that was so far away from the downtown area but that he still had hope.

“I give it six months and this place will be awesome,” he said. 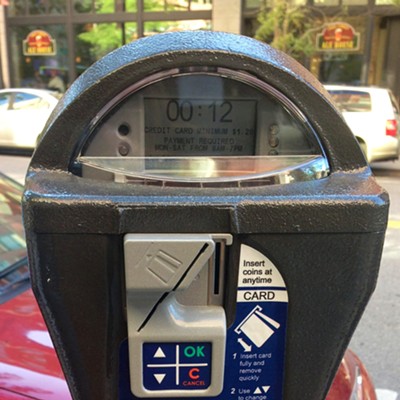