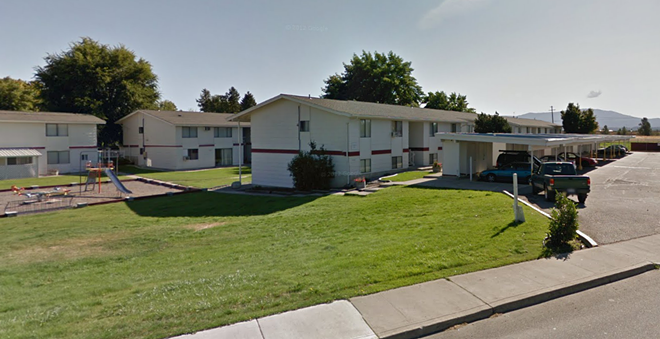 Additional details from the officer-involved deadly shooting of Roy Jacobs Jr. in Spokane Valley last June depict a chaotic scene in which deputies struggled with family members, shouted orders and fired the fatal shots within the confines of a crowded living room.

The Spokane County Prosecutor's Office cleared Deputy Jerad Kiehn of any wrongdoing in the shooting late last month, finding his use of deadly force "justified" under the circumstances. A recently released decision memo outlines witness statements, including Kiehn's account.

Family members say Jacobs, 48, had drunk seven to 11 beers throughout the night with friends and family. They reported he called 911 three times in the early morning hours of June 1, asking to turn himself in on an outstanding warrant.

Jacobs' brother, Bruce, told investigators Roy "liked to call the police just to mess with them."

Deputies reported responding at about 5:45 am to the Somerset Meadows apartments on the 4100 block of North McDonald Road in Spokane Valley. Kiehn reports he and two other deputies, Scot Nelson and Tanya Walker, knocked on the door and were let inside the apartment unit.

"[Kiehn] saw Roy Jacobs sitting in a chair, a larger woman lying across him, wearing only a bra and panties," the memo states. "It appeared there was some type of struggle going on between the woman and Roy Jacobs."

The woman, later identified as Kelly Jacobs, told police Roy was sitting in a reclining chair. He was holding a collectible hunting knife, that investigators describe as having a 9-inch blade.

"She said she was sitting on the reclining chair with Roy, trying to take the knife away from him when the police arrived," the memo states. "Everything then happened really fast and Roy was shot."

Jacobs' niece opened the door for the deputies. Bruce Jacobs also stood off to one side of the room. Kiehn says the niece went to a back bedroom and he pushed Bruce out the front door as Kelly and Roy Jacobs continued to struggle in the chair.

"[Kiehn] started ordering [Kelly Jacobs] to get back and get away several times," the memo states. "She did not respond, so he went up, grabbed her by the ankles, and pulled her away."

Deputies Nelson and Walker joined Kiehn inside apartment. Kelly Jacobs remained lying on the floor as they yelled for Roy Jacobs to drop his knife. Kiehn told investigators he repeatedly ordered Jacobs to drop the knife, with Jacobs looking back with a "challenged look."

"[Kiehn] said Jacobs said nothing, had an odd blank look on his face," the memo states, "then proceeded to stand up out of the chair, with the knife in his right hand at a 45-degree angle towards Deputy Kiehn."

Deputies say Jacobs got to within 3 to 6 feet of Kiehn, holding the knife in front of him.

"Deputy Kiehn said he had nowhere to go," the memo states. "He said he feared for his safety so he fired two shots at Jacobs."

Walker, who was standing next to Kiehn with her gun drawn, told investigators she also ordered Jacobs to drop the knife several times. She watched as Jacobs stood and approached Kiehn.

"She thought he was going to stab Deputy Kiehn and was about to fire when Deputy Kiehn fired twice," the memo states.

Jacobs suffered a gunshot wound to the abdomen and a "non-life threatening" wound to his right hip. Deputies handcuffed him and applied Quick Clot to his wound. Kiehn says he asked for a pillow to elevate the man's head. Nelson says Kiehn tried to comfort Jacobs as they called for an ambulance.

"Stay with me, Roy," the deputy quotes Kiehn as saying. "We're right here. Medics are coming."

Jacobs was taken to Sacred Heart Medical Center where he was pronounced dead at 6:56 am. The autopsy showed he died from the gunshot wound and his blood alcohol level measured at .15, close to twice the legal driving limit.

Members of the Spokane Investigative Regional Response Team, a multi-agency program in which detectives from other departments investigate officer-involved cases, soon arrived on scene. They found a display of collectible knives on one wall with an empty space for the hunting knife.

Bruce and Kelly Jacobs stood crying in the parking lot. Neighbors reported a woman screaming, "You shot him. He's dying. Why didn't you just taze him?"

Family members have publicly disputed the deputies' characterization of the events, saying Jacobs was highly intoxicated and presented little real threat when the deputy opened fire.

Chief criminal deputy prosecutor Jack Driscoll writes in the Nov. 20 decision memo that deputies gave Jacobs repeated commands to drop the weapon. Jacobs instead moved toward deputies who had their weapons drawn on him.

"It was reasonable," Driscoll writes, "for both Deputy Kiehn to assume, given Mr. Jacobs actions of failing to obey commands, being armed with a knife, a deadly weapon, and advancing on a deputy who had a firearm drawn on him, that they had probable cause to believe he faced a threat of serious physical harm. He  was justified in his use of deadly force."

CAT FRIDAY: Gifts for your cat(s)