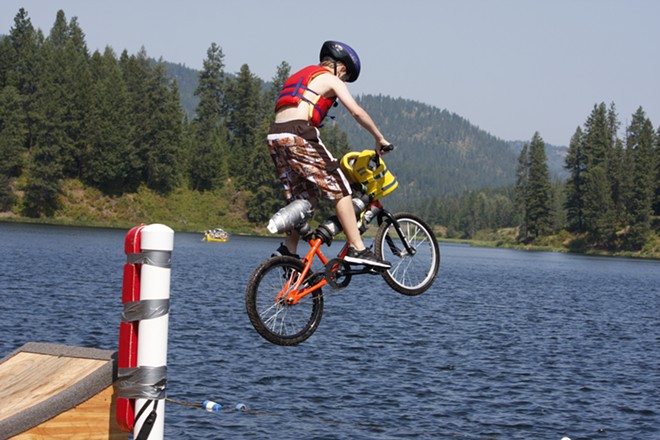 Back in March, the American Cancer Society announced it would focus mainly on its key mission of funding cancer research in lieu of camps across the nation, but kids affected by cancer will continue to have the week of free, medically supervised but still carefree fun known as Camp Goodtimes. After eight years at Ross Point Baptist Camp in Post Falls, the camp returns to its original home at Camp Reed.

“We welcome the return of Camp Goodtimes to Camp Reed and are committed to a smooth transition for the families. Our number one priority is making sure these children have the best week of their summer,” says YMCA Camp Reed Executive Director Lisa Vogt.

The American Cancer Society established an application process whereby camp sites could still apply for accreditation, and approached Camp Reed to suggest it go through the process for the continuation of Camp Goodtimes. Thanks to support from community organizations like Coaches vs. Cancer, Ronald McDonald House Charities, Cancer Care Northwest and Providence Healthcare, Camp Reed’s bid for accreditation and funding was a successful one.

“Because Camp Reed is an established camp, we are able to serve more children than they’ve been able to in the past, and so the donor dollar will go farther because we already have so much of the framework in place for providing a camp,” Vogt says. “We’ll be able to provide this weeklong camp at a really great value and serve almost twice as many kids with the same dollar amount as in previous years.”

A bit of that framework is an established summer staff that does not need to be trained only for Camp Goodtimes; year-round campgrounds; and the fact that Camp Reed is already American Camp Association accredited, and wouldn’t have to take steps towards accreditation just for that week. Ross Point Baptist Camp, though not endorsed by the American Cancer Society, will also run a weeklong summer camp for kids with cancer called Camp Journey, thanks in large part to donations from individuals and local businesses and organizations.

Since the YMCA and Camp Reed are so well-known in the community, they have a solid support base and can ensure that this camp continues to serve kids with cancer in the future. With Providence Health Care providing pediatric oncology staff and organizations like Coaches vs. Cancer, which raised more than $238,000 for this year’s camp at the 12th Annual Coaches vs. Cancer Weekend in August, the commitment from the community has proven itself strong and dedicated helping kids affected by cancer spend a week swimming, hiking, singing and just being kids.

“We have seen the positive effects that this camp has had on children in their fight against cancer, both during and after treatments," Jerid Keefer, Coaches vs. Cancer-Spokane Regional Coordinator, says in a press release. “The effect has been huge. We are thrilled the YMCA is stepping up to make sure that local kids fighting cancer get to continue to go to camp. We are committed to making sure this special week of camp continues for these kids in our region.”

Headed into its 29th year, Camp Goodtimes will continue with traditions like “Zag Day,” where Gonzaga basketball players visit the camp and hang out with the kids. This year the camp will run from Aug. 3-9 and registration is now open.

Spokane Indians will be sporting Salish logo this year