A few short ones to get started: What Richard Sherman is saying about yesterday’s game (and postgame interview) ... What happens when women journalists cover controversial topics ... A new profile of the president ... A strange and ethically questionable story about the creator of a better golf club (and the reaction to that story)... 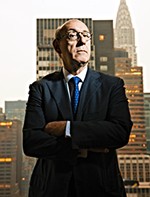 These days it can feel like we’re constantly battered by tragedy. Not to mention the world’s incessant wars and famines and injustices, there are the big and sudden ones. A tragedy strikes and American opens its checkbook in an effort to ease the pain. But who decides just what each victim is worth? How much should the survivors get? And what about the families of the dead? From the taxpayer-funded September 11th Victim Compensation Fund to Virginia Tech and Newtown to the oil spill in the gulf, that decider has been Kenneth Feinberg. In the January Esquire, Chris Jones has this profile.

A few years ago, Google introduced a tool called Ngram Viewer that delighted nerds of all disciplines: history, sociology, linguistics, math, statistics, you name it. The premise is simple but hugely complicated to pull off: What if you could analyze every book ever published and use those words to see trends in society over the past few centuries? The result, which draws upon the massive amount of data contained in Google Books, is very cool, so I was excited to read a new book from its creators called Uncharted: Big Data as a Lens on Human Culture.

The book walks through some fascinating examples, like how “baby sitters” became super popular following the post-war baby boom, and how they soon became “babysitters.” Another chart shows how Charles Dickens’ A Christmas Carol probably did popularize the phrase “Merry Christmas,” as has long been assumed. One of the most interesting chapters charts the typical rise of a famous person. (If you’re not dictionary-level famous by the time you’re 30, it’s almost definitely not going to happen.)

Overall, though, the book spends way too much time overexplaining why this tool is so groundbreaking. The minute you show me how it works, I immediately get that’s awesome. You don’t need to keep telling me how awesome it is. And, honestly, I expect to be dazzled. My whole life has been one long demonstration of the revolutionary power of technology. I don’t need to be convinced. The final appendix full of charts would make an entertaining book on its own. 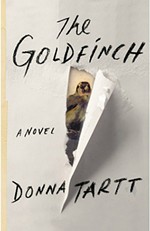 Being new to the area, my social life isn’t necessarily as robust as it could be these days, so I’ve been doing quite a bit of reading instead. Last week, I finished reading Donna Tartt’s The Goldfinch. It was long and filled with so many twists and turns it sometimes felt like I was lost, but I always found my way through new landscapes and intricate story lines with Tartt’s help. The woman can write, there’s no doubt about that and I found myself spending sleepless nights glued to the story of Theodore Decker from the loss of his mother as a child to his navigating and understanding himself as an adult.

The novel is certainly a dark one and there were times when I thought I wouldn’t make it through as Theo surrounded himself with toxic people and made cringe-worthy, gut-wrenching decisions that really only made me feel like I had to keep going just to see how things would turn out. So I guess Tartt knew exactly what she was doing. If have some time on your hands (quite a bit of time, the novel is almost 800 pages), I would definitely recommend getting lost in the pages of The Goldfinch. It’s been over a week since I finished and I still can’t stop thinking about it.

Random aside that has absolutely nothing to do with The Goldfinch: a few weeks ago I read Rainbow Rowell’s Eleanor & Park and all I can say is everyone should read this book. It’s not super heavy and I read it in a day. Definitely the best and most emotional first-love story I’ve read.

In the wake of Sept. 11, 2001, the NYPD reshaped its Intelligence Division into a massive and secretive counterterrorism operation. Led by a former CIA official, the division launched new surveillance initiatives to infiltrate and monitor Islamic places of worship, neighborhoods and businesses. Pulitzer-prize winning investigative journalists Matt Apuzzo and Adam Goldman, both formerly of the Associated Press, dissect those efforts in Enemies Within: Inside the NYPD's Secret Spying Unit and Bin Laden's Final Plot Against America.

The reporters first unearthed the targeted surveillance in 2012, revealing unsettling efforts by the NYPD's "Demographics Unit" to surveil individuals with little or no probable cause. The book, released in October, goes on to follow the trail of would-be terrorist Najibullah Zazi and the investigators trying to head off his planned attack on the NYC subway system in 2009. With some lackluster reviews from New York-based media, the book highlights the thin line between civil liberty and security. But the strength of the book remains its depiction of the candid closed-door conversations and complicated logistics involved in modern counterterrorism operations, illuminating both unnerving capabilities and stubborn bureaucracy throughout the system.