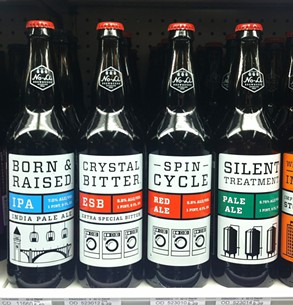 Lisa Waananen
Some stores have the beer in stock as both Crystal Bitter and Spin Cycle. (These were placed beside each other for photo purposes.)

Bars got new tap handles, bottles got new labels. No-Li had the Crystal Bitter identity on its own website through the end of the year, but has now switched the names and images. It’s still possible to find Crystal Bitter around town — as well as drinkers and servers still confused about the switch — but the transformation has tipped toward the new name.

The description on their site confirms that the beer itself hasn’t changed.

Crystal Bitter, No-Li’s best-known beer, took home a Gold Medal in the Extra Special Bitter category at the 2012 Great American Beer Festival. Its original name played homage to its crystal malts and the Crystal Laundry in Riverfront Park, which was torn down for Expo ’74. (You can still see of the foundation bricks.) The bottle's laundry motif predates the Spin Cycle name.

Though Spin Cycle is now labeled as a “red ale” on the bottle, No-Li still describes it as a “celebration of the classic English-style ESB.” ESBs are typically considered more akin to British-style pale ales than red ales, but lots of beers cross the traditional style boundaries. Reds are broadly interpreted, and the crimson-hued Crystal Bitter/Spin Cycle has always been an unique one, whatever you call it.

No-Li offered a more traditional — and excellent — red ale this past year in its rotating Expo Series. The latest in that series is the single-hop Skyrail IPA, also made with Amarillo hops, which is now out in 22-oz. bottles.

A most amazing #YOLO wish