Here’s a sneak peek at this year’s Inlander Restaurant Week menus. Not that helpful, sorry, but you can see they do exist and they’ll be up at the end of the month. And more than 70 participating restaurants are now listed on the site. 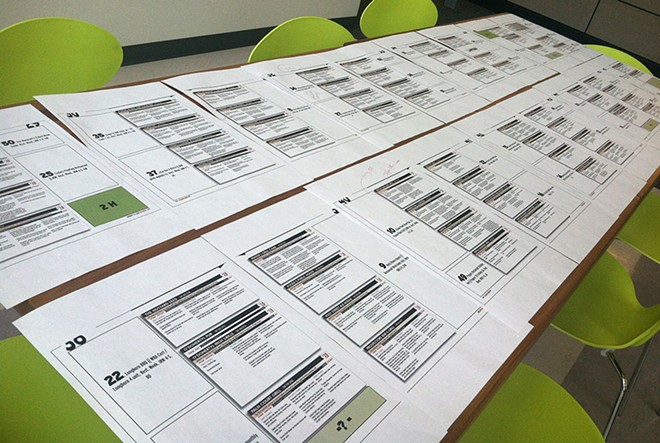 This week’s Entree newsletter has news of Barlows Family Restaurant’s move to a newly constructed building in Liberty Lake twice the size of their previous spot.

The soft opening at Chairs Public House has not been especially soft — customers were pretty much waiting at the doors. But they still wanted to have an official Grand Opening, and that’s happening this Friday. The party starts at 7 pm, but specials will be running all day and Victor’s Hummus will offer samples from 2:30 to 5:30 pm.

Give blood, get a donut — Dawn of the Donut is holding a blood drive this Saturday from 8 to 11 am. Use sponsor code “DawnoftheDeadDonut” to sign up at inbcsaves.org.

While trying to order sandwiches this week, we heard Kowalski’s Deli is temporarily closed.

Spokane’s first Wingstop location, in North Spokane, is planning to open toward the end of February.

The Unforgiven Lounge up near Mead High School is also planning to open soon.

The Daiquiri Factory in downtown Spokane is holding a soft opening party on Feb. 1, with a number of other events already scheduled after that.

Looking for a Valentine's date? The historic Commellini Estate is opening up for five-course dinners on Feb. 14 and 15 and reservations are required. (See other food events here.)

Last week we mentioned the Doma/Selkirk Abbey collaboration called Guilt — now, up in Sandpoint, we’ve got a collaborative coffee porter from MickDuff’s and Evans Brothers.

A few notes about what’s coming up at River City Brewing that didn’t fit in this week’s story:

• They’ll be doing regular brewery tours soon, so keep an eye out.

• They’ve got a limited-edition ESB in the works, which should be out sometime in February.

• They’ll be adding a second IPA to their standard lineup this year. They started with a lower-alcohol sessionable IPA, which is quite tasty, partly as a alternative to the big, hoppy IPAs made by seemingly every Northwest brewery. But plenty of people — including the folks at River City — really like those bigger, hoppy IPA, so they’re working on one. They’ll also still release the Clocktower Imperial IPA as one of the quarterly big beers.

For serious beer nerds who aren’t impressed by just wandering the aisles at Total Wine, Nu Home Brew & Bottles is launching a Beer Geek club with access to exclusive bottles all year long.

New career goal? A classmate of mine from grad school shared this photo recently: “The highest accolade a reporter could ever have.”

Read previous food news here. If any local brewery would like to name a beer after me, we could probably work something out.

MORNING BRIEFING: A charter school is approved, Mike Ormsby is a hero, and Bieber is arrested