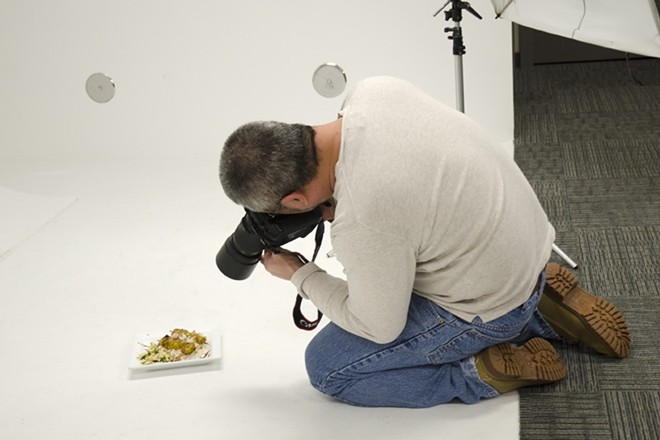 Lisa Waananen
Inlander photographer Young Kwak photographs one of many Restaurant Week dishes in our studio this afternoon — lots of delicious food photos headed your way.

Restaurant Week is coming soon, and if you don’t want to wait for the print guide to come out in the Spokane area on Feb. 20, we quietly posted those stories online already. But we’ll also have new ideas — and especially new photos — as the event approaches.

Barrister Winery took home gold (and a couple of silvers) from the American Fine Wine Competition. Read more about that in this week’s Entree newsletter, as well as Orlison’s new collaboration with Team Gleason to create Pilsner 37.

The Yards Bruncheon in Kendall Yards opened on Wednesday, with breakfast and lunch seven days a week.

This weekend brings the return of the notorious #Spiceawar — read about that here — and Saranac Public House is offering super-spicy weekly specials in its honor.

If you need an interesting excuse to drink some coffee from local Manners Roasting Co., here’s an experimental event at Fellow on Friday.

Poole’s Public House is celebrating its one-year anniversary on Tuesday with music and half-off food and drinks.

Chobani, which has a massive yogurt-making plant in Idaho, is back in the news because Russia won’t let American athletes eat Chobani yogurt in Sochi. (Also, if you saw Chobani’s Super Bowl spot starring a bear and thought the setting looked awfully Northwestern, it was filmed in Hope, B.C.)

Parting thought — recommendations on pairing beer and Girl Scout cookies. A lot of those beers aren't distributed here, so we'll have to ponder a local list...

THIS WEEKEND IN MUSIC: Carr’s Corner final show and much more