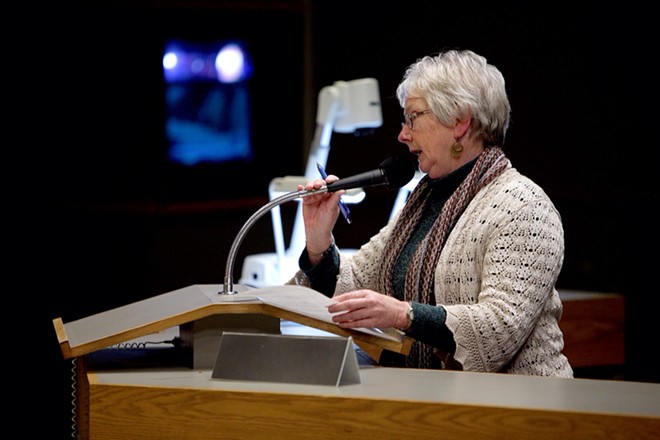 Young Kwak photo
Ann Murphy, president of the local chapter of the League of Women Voters, speaks in opposition to the contract approved by the city council.

After months of negotiations and community pushback, the Spokane City Council approved a new contract with the Spokane Police Guild at its meeting Monday.

Along with increases in pay and retirement benefits through 2016, the tentative contract agreement adds some new authorities for the city's Office of Police Ombudsman. The contract now goes to the Spokane Police Guild membership for approval. The council also approved an ordinance Monday implementing the new roles of the ombudsman.

The new agreement maintains the current structure in which the ombudsman sits in on the police department's Internal Affairs investigations but adds a few new roles for the ombudsman.

Because the contract does not completely remove the ombudsman from the police department's own internal process, some oversight advocates have said it doesn't go far enough. Those activists streamed forward to the microphone Monday, saying the agreement falls short of what citizens are demanding and calling it a "mockery of independence" and a "dishonor" to Otto Zehm.

"We think the city of Spokane could do better," said Ann Murphy, president of the local chapter of the League of Women Voters.

But even some of the council members who have most vocally criticized the mayor on this issue supported the contract, saying it would implement the voter-approved charter amendment calling for a "totally independent" ombudsman.

"It's never going to be perfect," Stuckart said. "This is a win for the citizens."

Councilman Mike Fagan cast the lone "no" vote against the contract. He told the Inlander he believes it's "too rich."

The path to this contract agreement has been a long and contentious. The question of police oversight has been in the public eye for decades and especially since the 2006 death of Otto Zehm at the hands of Spokane police. This latest contract has been debated publicly since Councilman Steve Salvatori introduced an ordinance in the fall that would have circumvented the negotiation process entirely, making the city vulnerable to legal action. Emotional town hall meetings and administration-vs.-council clashes have characterized the months since.

"This is huge progress," Salvatori said before the vote, "and this is huge real-time progress where we can fully satisfy every single part of the charter."

Read the full contract here and look for more in this week's paper.

Why "Date Grape Koolaid" is worth getting upset about