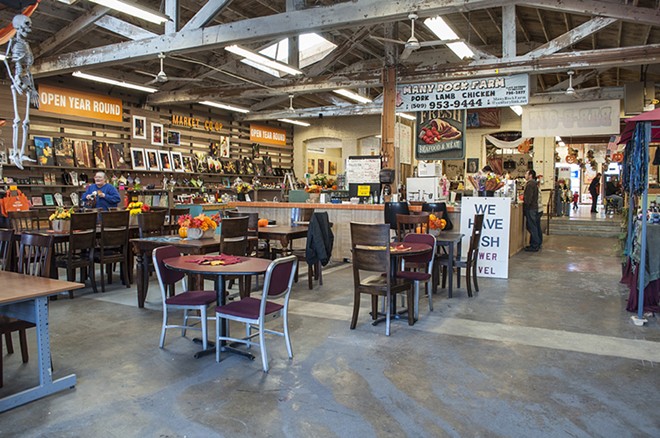 Sarah Wurtz
Inside the Spokane Public Market, which houses a variety of vendors at 24 W. 2nd Ave.

Two and a half years after opening as a year-round indoor farmers and local artisan market place, the Spokane Public Market announced it's closing for business at the end of the day next Friday, March 7.

Board President Torie Foot told the Inlander the market just couldn't financially sustain itself over the long term.

"It was a difficult decision and it made everyone really unhappy," Foot says. "That wasn't our intention and people worked hard to figure a way out of it... We needed more support from the community than we were getting."

The market's 20 produce, food, art and artisan/craft vendors plan to offer discounts on their goods before vacating the space next weekend, and Foot hopes to see a good turnout so the market can finish paying its outstanding bills.

She says the vendor stall rental fees just weren't enough to keep the market in the space, which it rented from building owner Pacific Bridge Properties. Original plans when the market opened were for the nonprofit to purchase the building sometime this year as part of a 15-year lease agreement.

When she took over as board president about a year ago, Foot says she realized that the nonprofit's books were disorganized. A new accountant put things in perspective.

"We were all shocked at the bills and it just became really clear we don't have enough volume to keep up, so we met two weeks ago and realized this was really the best option," Foot says. "It's not our favorite, but [it is] the most honest."

Vendors were informed at that time of the decision to close the market.

Foot says foot traffic slowed down significantly during the winter months, and even more so when neighboring sustainable living business Sun People Dry Goods Co., which occupied the westernmost end of the building, moved out in early February. Sun People is relocating to a currently under construction space at 19 W. Main, which was the former home of Merlyn's before owner John Waite moved the business to an adjacent space at 15 W. Main. It's been confirmed that Black Label Brewing Co. is also moving into the shared business space being renovated by the Community Building and Saranac's owner Jim Sheehan.

The public market's historic brick building on the corner of Browne and Second has two other remaining tenants: a new painting and wine-tasting venture called Pinot's Palette and the yet-to-open Tinbender Craft Distillery.

Foot says the building's owners have indicated they want to retain the Spokane Public Market name, but the nonprofit venture that oversaw the market is dissolving. There aren't any plans to relocate the nonprofit market to a smaller or more affordable space.

Out for Inlander Restaurant Week: All over town with Dave, Ken & Molly

Out for Inlander Restaurant Week: In Coeur d'Alene with Sammy Eubanks and Ellen Travolta