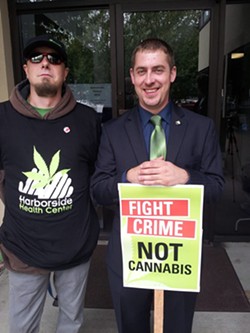 In Olympia this morning, the Washington State Liquor Control Board awarded the first license to grow and process marijuana in the state, and it didn't go to one of the many people applying on the liberalized west side. It went to a grower from Spokane.

Sean Green owns a pair of medical marijuana dispensaries in Shoreline and Spokane under the name Pacific Northwest Medical. Green also operates Kouchlock Productions, a dispensary on East Francis that is also the trade name under which he'll grow recreational pot. (The name refers to being too stoned to leave the couch.) The license issued today allows Green to grow up to 21,000 square feet of recreational marijuana.

"Cannabis prohibition is over," Green said after receiving the license, according to the Associated Press. "I'm coming home with jobs, Spokane."

UPDATE: The Seattle Times has reported on several complaints filed against Green by former employees, which he refused to discuss at the announcement today.

Green has been an active voice in Washington's marijuana debate, testifying to the Liquor Control Board about regulations and participating in monthly Spokane City Council subcommittee meetings about local implementation of Initiative 502. He also recently made national headlines when he started accepting Bitcoin at Pacific Northwest Medical only to be rejected by the company he used to convert Bitcoins to dollars because of marijuana's federal status.

The liquor board began accepting applications to grow, process and sell marijuana in November and received 2,800 applications for production alone. They'll continue issuing producer and processor licenses as they are approved in the coming weeks and will then move on to retail licenses. Stores, which will be limited in number and licensed through a lottery process, are expected to open across the state by the summer.

Meanwhile, Colorado's recreational marijuana market has been up and running since the start of the year and is hauling in serious tax dollars for the state. Nationally, unanswered questions remain — banking, for one.