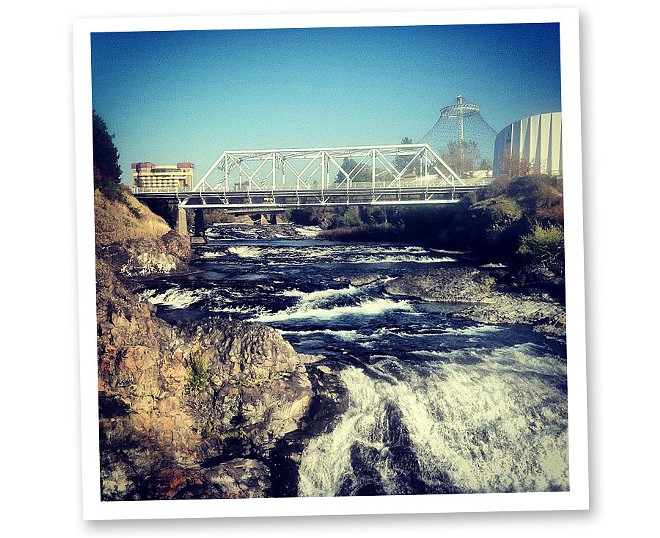 Some people complain that there are too many questions on the Inlander’s Best of the Inland Northwest ballot — but the real problem is not having enough questions where you already know the answers. In honor of the 2014 Best Of winners issue, we decided to make up some additional questions and award them unilaterally. To be clear, none of these are remotely official or voted-upon.

Best New Local Brewery Trend
FOOD TRUCK MENUS
Sure, you could go with something like “barrel-aged beer” or “collaborations with local coffee roasters.” But no, the best thing has been seeing local food trucks like Couple of Chefs, Bistro Box and Big Pappa's BBQ park outside local breweries like Iron Goat, Ramblin’ Road and Perry Street Brewing to create a full gastropub experience. It’s so brilliant, we almost take it for granted already. (LISA WAANANEN)

Best Place To Take Someone Who Thinks Tofu is Gross
STELLA’S CAFE
If it was up to us, we here at the Inlander probably would have awarded Stella’s at least a few Best Of victories. But, in lieu of that, let’s give them some recognition here:Ask most omnivores if they like tofu and you'll probably get an answer ranging from "no" to "hell no." But offer them a jerk tofu, tofu banh mi or BBQ tofu from Stella's and you may get a different answer. Here, meatless sandwiches aren’t a second thought, but a mainstay of the menu and they're good, even to omnivores. (HEIDI GROOVER)

Best Place to Instagram
RIVERFRONT PARK
For the most convenient collection of the Lilac City's best iconic, historic or highly Instagram-able landmarks — head to Riverfront Park. The downtown park has pretty much all of Spokane packed into a couple of acres. First of all there's the Spokane River, which is going gangbusters this time of year. Then there's the skyline-defining Clocktower and Pavilion. But there's also the Looff Carousel, the giant Radio Flyer wagon, the trash goat, the ferris wheel, that old butterfly thing and all the other random Expo artifacts. So break out those vintage photo filters and shoot like it's 1974. (JACOB JONES)

Best Fair Weather Fitness Motivation
LOCAL RUNNING CLUBS*
Rather than pick the running club I’m an active member of, (psst… it’s Next IT) it’s more appropriate to say that all of the Inland Northwest’s running groups are a good thing. Coming from someone who is still learning how to run and not hate it, being a part of a running group that meets weekly to huff and puff its way around the city is huge motivation to get off my butt and get moving. Sure, every group in town has some super-athletes and even a few Ironman alum, but in my personal experience there’s also lots of newbies every week — people who want to push themselves and become inspired by the athletic abilities of those around them. It’s kind of like being part of an adult track team — you get a great group social experience, and you feel really good about yourself at the end of a toiling trek, whether you simply completed a mile or three without having to walk and catch your breath, or you “PRed” and beat last week’s time. (CHEY SCOTT)

*For those interested, here’s a few local, weekly running clubs to check out: Flying Irish, Lantern Running Club, Fleet Feet Spokane. Or, if you have one handy, see page 186 of the Inlander’s 2013-14 Annual Manual.

Best “This Must Be Heaven” Spot
SKYBRIDGE BETWEEN NORDSTROM AND SPOKANE PUBLIC LIBRARY
I was new in town a mere eight months ago. As I can (and do) read, I was quick to head over to the downtown branch of the Spokane Library and sign up for a library card. But I didn’t know just how impactful the trip would turn out to be. After perusing the awesome free selection the library had to offer, I felt the need to go across the street to the best department store of all time, Nordstrom, to (window) shop. But as I was leaving the second floor entrance of the lib, something caught the corner of my eye — a skybridge. I walked cautiously over toward it. And there above bustling Saturday traffic I discovered a connection just too good to be true. In my mind, it is the skyway to heaven either way you walk it. Nordstrom, library, library, Nordstrom. One day I’d like to set up a small table with chairs and just sit and look out over the gorgeous view, basking in the idea that no matter which way I go from here it will be amazing. (LAURA JOHNSON)

Best Local Alternative to Anthropologie
ARTEMIS
To everyone who voted for Anthropologie as Best Store the Inland Northwest Needs: I’m with you. But we don’t have one, and maybe that’s OK, because the upscale-artsy women’s store is owned by the same company as Urban Outfitters and has recently been caught up in some of the same backlash for copying independent designers’ ideas, appropriating “ethnic” and Native American motifs and just being generally cold and corporation-y. My favorite local alternative is Artemis on First Avenue, which has expanded from a small vintage shop to a spacious, fully stocked mix of clothing, accessories and household goods. (LW)

Best Stretch of Street
THAT STRETCH OF RIVERSIDE BETWEEN MONROE AND BROWNE’S ADDITION
As any hotshot urban planner can tell you, the design of a street can change the character of the city. And if there were a street I’d want to define more Spokane’s character, I’d pick that stretch of Riverside just west of Monroe. The one lined with grass and trees in the median, by the pillars of the Spokane club and the former Masonic temple.
The former, former Inlander offices used to be located there, so I know it well a little over three years ago. I’ve ridden my bike through that stretch for three years now. I’ve picnicked there, cross-legged in the grass, taking peanut-butter-and-jelly out of brown paper sacks. I’ve played chess, one evening there, on that checkerboard on the bench in the middle. I’ve taken a date there with a thermos full of hot chocolate one cool summer evening.
And each time, it’s felt absolutely perfect and peaceful. Credit a nice little bit of urban design. (DANIEL WALTERS)

Best Food You Forgot Existed
SOUP
Specifically, soup from Soulful Soups and Spirits in downtown Spokane. This winter has plagued my household with the common cold — like, a lot. But even between the feeling terrible and the watching too much TV, we’ve made time to stop by Soulful Soups. Soup and beer bread to go has had a way of fixing everything. Tomato basil and boozy black bean are two of my favorites, but check out each day’s specials here. (HG)

Best Smoothies Left Behind
FUSION JUICE
Back when the Inlander was headquartered in the Hutton Building, we were within walking distance of a slew of downtown food options. Kendall Yards is blossoming, that’s for sure, but one thing I miss dearly since we moved to the our cool new ‘hood is frequent sunny day walks over to Fusion Juice for a delicious smoothie. My all-time fave is called “That One Thing,” (it’s always fun to say that when you order) and comes packed with orange juice, peaches, strawberries, bananas, nonfat frozen yogurt and orange sherbet. It’s so good I’d suck down nearly the entire thing during the quick walk back to the office. From the looks of the website, Fusion is also now serving up its own sub sandwiches now, too. Guess I’ll have to come up with an excuse to return soon. (CS)

Best Pothole on My Route to Work
FIRST & MONROE
In a city of stunning potholes, I’m not even going to pretend I know whether this one is the best. But it’s a gaping, car-shaking doozy every day — the kind of pothole you can’t avoid because it’s in the middle of one of the busiest downtown intersections. The kicker is the time I almost tripped into it while walking. (LW)

Our 29th annual readers poll — bigger and bester than ever!