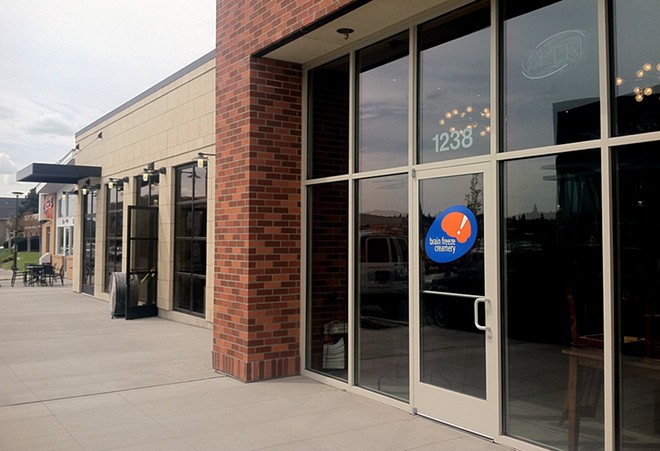 Lisa Waananen
Brain Freeze is opening early next week. Next door, the Wandering Table is opening later this month.

The Brain Freeze shop in Kendall Yards is opening early next week. Next door, the Wandering Table announced its opening date: May 22.

Egg It On, a new brunch joint in the former Hooter’s location, is now open.

Paragon Brewing in Coeur d’Alene is now open, and serving up a variety of local brews.

The Fountain Cafe in Riverfront Park is now on its full summer schedule, open every day of the week.

The markets are back! The South Perry market is moving back outdoors today for the first time this year, and we hear they’ve got fresh produce, plant starts, cheese bread and more. The Spokane Farmers’ Market returns Saturday, and the farmers market in Moscow is also back for the season.

And, somewhat related, here’s a new Kickstarter campaign from Flora, a yogurt company, which is planning to share space with Batch Bakeshop when they open this July in West Central. Pledge $500 to get a quart of yogurt every week for a year.

A country nightclub called the Palomino Club is soon opening at what used to be the Center.

Conveniently in time for Mother’s Day, it’s Spring Release Weekend for local wineries around town. Here’s a list of new releases and events from Nectar Tasting Room, and the Cork District page has a lot more.

Then, starting Monday it’s American Craft Beer Week. (Brush up on your beer vocabulary with the handy guide in this week’s issue.) No-Li is hosting Master Cicerone Nicole Erny — the youngest person and first woman to pass the two-day master cicerone exam — on Monday evening. And this American Craft Beer Week flag could use a little more Inland Northwest representation, but No-Li got itself a nice place of honor:

Coming up a bit later, the Spo-Can canned craft beer festival is returning to the Elk at the end of May.

VIDEO: What to watch for this summer at the movies

Watch, and vote for, your favorite 50 Hour Slam movie