Watch, and vote for, your favorite 50 Hour Slam movie 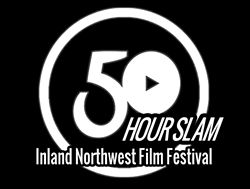 The 50-Hour Slam films were screened at the Bing Crosby Theater last weekend, but the fun isn't quite over yet.

The winners of the formal competition have already been announced. Click here for a list of winners, or don't if you want to keep an objective mind when you head to vote for the Viral Vote award.

The 50-Hour site now has all the films in their entirety and a poll for your voting pleasure. You can only vote once per email address.

If you don't know anything about the 50-Hour-Slam, here's a rundown from a recent issue of the Inlander about how teams of Spokane filmmakers manager to write, shoot and edit a short film in the span of just two days.

Announcing our next Suds and Cinema: Ride a bike with Napoleon Dynamite