A few weeks ago, I went to talk to Kohl Crecelius — co-founder of the lifestyle brand and poverty-fighting nonprofit Krochet Kids — hoping to figure out why he doesn’t live in Spokane anymore. 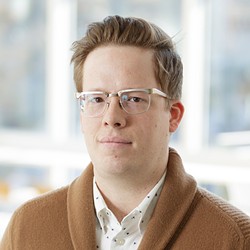 Kohl and his other co-founders — Stewart Ramsey and Travis Hartanov — all grew up here, in the vicinity of Colbert and Chattaroy. Stewart used to play soccer with my brother, for what that’s worth.

They began crocheting in high school, mostly to have the best hats on the local slopes. Later, in college, volunteering around the world — and especially in East Africa — brought them into intimate contact with desperate poverty. The trio hatched a plan to teach impoverished women in troubled countries to crochet amazing-looking hats and clothing they could sell to other brand-aware, socially conscious people, and they’d pay the women a living wage and get them out of poverty. The rest has been well-documented by many media outlets, including this one, so I won’t rehash it needlessly.

Except to say they had a powerful idea that became a transformational nonprofit. Starting around the same time as companies like Tom’s Shoes, Krochet Kids was on the leading edge of our current wave of social ventures — companies that try to take the best of the for-profit sector and the nonprofit sector in order to generate revenue while making the world a better place. KK is a nonprofit, but only 15 percent of their revenue comes from traditional fundraising — a staggeringly low number. The rest comes from selling awesome clothing to cool kids.

So, with all that as background, I went to talk to Kohl hoping to find out why, although Krochet Kids has its origins on the mountains of Eastern Washington, its office is in Costa Mesa, California. Did they find a mentor? Investors attuned to social ventures? A culture of innovation that inspired them?

The answer is pretty mundane: sun, surf and snow-type stuff. They have great things to say about Spokane, they host some of their biggest fundraisers here, and Kohl still calls it “home.” The more interesting story, it turns out, is what’s happening in Uganda. Specifically, what happened after they started paying that living wage.

It’s designed as a three-to-five-year course. They’ll graduate their first 50 women — who Kohl says have now become teachers, community leaders and business people — this year. For every success, though, he says they identified another need.

Before a person can formulate a business plan, they have to identify their community’s needs, figure out which of those needs they are well-suited to impact, and develop the solution. That’s a complicated calculus. So they began employing local women as mentors, “people who are college-educated — teachers, counselors — but who still understand the local struggles.” Kohl says they look for people who “will care for the whole person. People who can just love on the women, but then help them contextualize the things they’re learning. It takes visionary leaders.”

The needs kept coming. With education and mentorship, interesting, important business ideas began to form, and Kohl says they realized something else was missing: investment capital.

So they started a credit union, self-capitalized by the women in the program, and able to lend money to start-ups at lower rates than commercial banks. SACCO (the Savings and Credit Cooperative) is now the largest credit union in Northern Uganda, financing the startups that will create more good jobs and, the hope goes, create a beneficial cycle that radiates outward from KK and touches entire communities.

Taken together, Kohl says what they’re doing transcends employment, education, entrepreneurship and capitalization alone: “It’s giving people permission to have dreams.”In the last decade or so — roughly the time Krochet Kids has been operating in Africa (they’re also now in Peru) — Spokane has given itself permission to dream, too.

From ballsy municipal projects like the Riverfront Park plan to our town’s young chefs taking our city seriously as a place to create a real culture around food, we have set increasingly lofty, increasingly ambitious goals for ourselves to change this region and, increasingly, a young generation of smart, educated, idea-and-conviction-driven people are wanting to accept those challenges.

But when I talk to smart, young people about the obstacles they’re facing, it sounds a lot like the problems Krochet Kids encountered in Uganda. And if the problems are the same, it stands to reason the solutions would be similar too.

Maybe what we need in the Inland Northwest is more of what Kohl and his team have begun to build in Uganda: mentors to help bright young leaders plan for the long game, and courageous institutions willing to stake the funds to get them there.

I believe deeply that the sooner that happens, the faster Spokane grows. The longer we wait, the further behind we fall. ♦

Luke Baumgarten, a creative strategist at Seven2 and former culture editor of the Inlander, is a co-founder of Terrain and the founder of Fellow Coworking. He tweets @lukebaumgarten.