3 Spokane pot stores get licenses, only 1 likely to open Tuesday 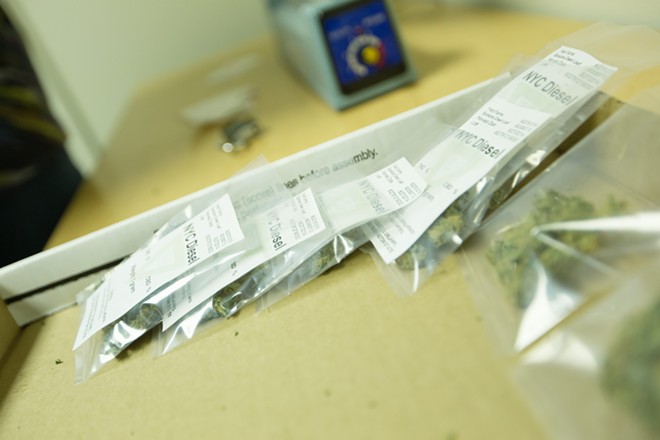 The Washington State Liquor Control Board issued 24 marijuana retail licenses early this morning, with three going to locations in Spokane. But only one of those appears ready to open tomorrow.

Spokane Green Leaf at 9107 North Country Homes Boulevard is likely to open in early afternoon, though the owner is still waiting to find out when his pot will arrive to determine an exact opening time. In order to get pot to stores, growers across the state have to enter their products into a traceability system and then wait 24 hours before shipping it to stores. But in order to start that process, the retailers to whom growers planned to sell had to be licensed. So this morning's issuing of licenses meant the rush was on to enter pot into the system, start the 24-hour clock and get product to stores by tomorrow.

The other two stores licensed in Spokane aren't quite ready, but will likely open in coming weeks. Sam Calvert, owner of Green Star Cannabis on North Division Street, says he is still determining an exact open date. Justin Wilson, the owner of Satori, also on North Division, had planned to open tomorrow, but may now be facing delays. Wilson has not yet returned a call for comment, but tells the Spokesman he's having trouble getting product.

The list notably does not include Scott O'Neil, the owner of O'Neil Industries, who was promising TV reporters earlier this summer he'd be opening July 1 as Spokane's first legal pot store, even as the Liquor Control Board was refusing to confirm when or to whom it would be issuing the first retail licenses. O'Neil did not return a call requesting comment Monday and Sean Green, the state's first licensed marijuana grower who was earlier commenting on O'Neil's behalf, would not comment on the status of O'Neil's planned retail location. Marijuana growers cannot also own retail stores, but Green and O'Neil had been working together in a limited way and planned to operate at the same location. Green's growing and processing business — Kouchlock Productions, which he's now looking to sell to become an industry consultant — is operating and will have 18 strains of pot for sale in three stores opening on the west side tomorrow, Green says. Among those likely to be the first making sales is Cannabis City in Seattle, where Initiative 502 author Alison Holcomb and Seattle City Attorney Pete Holmes are expected to make an appearance.

Building a retail marijuana business and getting licensed was "the hardest thing I've ever done," Satori owner Wilson told the Inlander late last month. And he's not alone in that sentiment. The state requirements for the businesses — from finding landlords and insurers to installing enough security cameras — are strict and complex, and it's unclear when, if ever, some who planned to open this month actually will. Spokane County will be allowed 18 total marijuana stores (eight in the city of Spokane and three in Spokane Valley), with a state lottery determining who would get the first chance at a license. But when we started checking in with those at the top of the lottery list last month, many of them weren't close to opening. Some had problems with landlords who had said they could rent a location for the store and then backed out. Others couldn't find the required insurance or growers with product to sell. Still others are refusing to talk to media.

That's all on top of statewide issues, including an expected weed shortage. The state has licensed 62 growers, but it's been a slow process and marijuana takes months to go from a seed or small plant to a product ready to be harvested and dried for packaging. That means not all of those growers have pot ready to sell. Meanwhile, applicants across the spectrum have had trouble meeting the board's requirements.

"This is a gold-rush mentality and everybody wants to get rich," Liquor Board member Randy Simmons told the Associated Press. "Some people just don't have an idea what they're doing — no clue at all. It slows down the process."

Washington's slow process to get this whole system off the ground is often compared to Colorado's, which opened to long lines and global media attention on January 1. But Colorado's well-regulated medical marijuana system meant the state was willing to start the market by licensing medical dispensaries to also sell recreational pot. Washington's rule-makers instead set out to create a brand new and completely separate recreational system because of concerns that our medical marijuana system is too unregulated. That's brought months of rulemaking, including most recently strict rules for pot edibles. (No edibles makers have been licensed in the state, so there won't be any in stores this week.)

Look for more about the historic opening of Washington's recreational marijuana market in this week's issue.