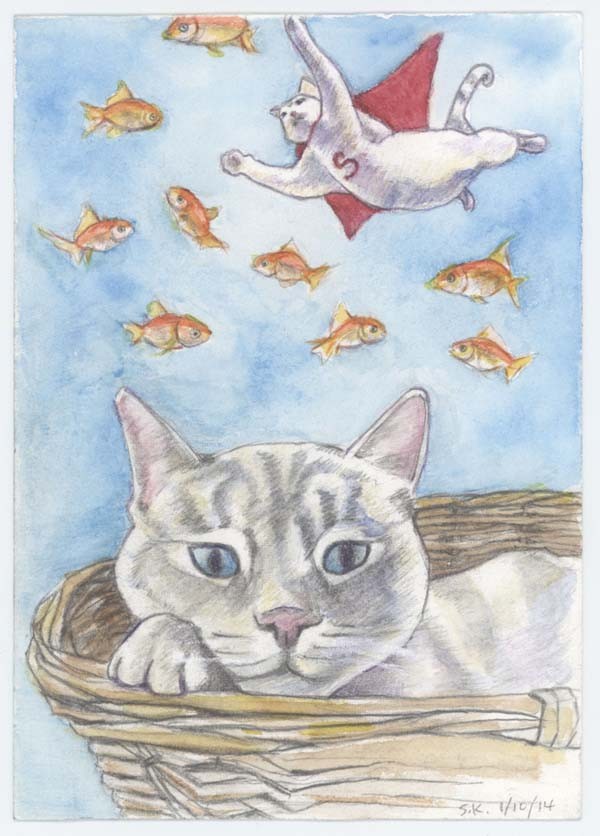 Shawfan Khan
"Walter Kitty"
Cats are a lot of things to their owners — snuggly companions, non-judging confidants, sources of great joy and comedic relief. To Spokane artist and designer Shawfan Khan, her cat Crusty is all of these things but also has become the muse for her latest work. The lifelong artist hasn't always painted cats, but after relocating to Spokane about two years ago and a subsequent decision to adopt a shelter cat, she was inspired to create a new body of work — whimsical, imaginative watercolors themed around the feline form.

Khan's art is being featured at Pottery Place Plus (203 N. Washington) through the month of August, and for today's First Friday gallery events she'll be at the downtown art space for a reception this evening, from 5-9 pm.

The artist describes her collection of cat watercolor drawings as "quirky and entertaining... I try to capture some of [the cat's] silliness by illustrating a series of cats secretly plotting world domination, or just anthropomorphizing them from pop culture."

Many of Khan's pieces are inspired by Crusty, the cat she adopted from SCRAPS a little more than a year ago. When she went to the shelter, the first-time cat owner says she was looking to bring home a Siamese kitten. Instead she picked Crusty, an older, somewhat disheveled former stray, because he reminded her of a dog she'd once had.
click to enlarge

"He greeted me at the cage and he wanted me to pet his head," she remembers.

Crusty stood in as the live model for many of Khan's paintings exhibited in her show, and she says he enjoys watching her paint perched in his kitty basket in her home studio.

"[The art] is cartoonish, but it's still realistic, so I'd look at his anatomy, and he's a very active cat. I'll see him do goofy things so that gives me inspiration to paint — it will trigger something," she says.

Khan's art background includes a degree in art and graphic design from Oregon State University, along with a degree from the School of Visual Arts in New York City. She also works in interior design alongside her art, the latter of which includes commissioned pieces and pet portraits. See more of Khan's work on her website and Facebook page.

Pottery Place Plus is exhibiting Khan's work alongside illustrations by Saju Kobayashi Kelch, inspired by paper cutouts, Japanese Ukiyo-e and comics. Both artists' work is on display through Aug. 28, and the gallery is open daily.

Family and friends remember and mourn for Sheena and Chris Henderson