As the summer heatwave continues, so does artists' work on new murals along the walls of four downtown railroad overpasses. Today, work also begins on a fifth mural recently added to the line-up of the Spokane Arts-led project.

With some additional funds secured toward the project, the arts vitality nonprofit chose another site for a mural to brighten the dark and dirty corridors dissecting downtown's streets. In June, Spokane Arts approached long-time local artist Tom Quinn about re-envisioning a familiar montage he painted at the intersection of Division and Sprague more than 20 years ago. The current mural, showcasing Spokane's unofficial mascot — the marmot — has long been a fixture of downtown, but as the Inlander mentioned in our big Sprague Avenue profile back in May, Quinn isn't a fan of this particular body of work, calling it "grotesque:"

“Even I don’t think it looks like a marmot,” he says. “People would come by and say, ‘Is that a gorilla?’”

Quinn has other well-known murals around town — the Gonzaga mural that’s now in storage, the faded train murals in Hillyard, the Felts Field mural at the airport, the fish mural farther down Sprague — but the marmot mural was his first, painted in two weeks in June of 1993.

An underpass like that is a difficult place for a mural. “Greasy mud” and pigeon guano drips down, Quinn says. The relative privacy means people pee on the walls. Then there’s the vandalism, too — someone recently felt the need to leave a miniature graffito in the marmot’s nostril.

“I would love to repaint that sometime,” he says.

Quinn's design for the current mural's replacement still highlights iconic features of the city and the region's history, and there's even a marmot or two as a tribute to its forebearers.

Tom Quinn
The artist's design for the Sprague-facing side of the underpass.

Spokane Arts program manager Austin Stiegemeier says the decision to add a fresh look to the existing mural was partly due to Spokane Arts' partnership with the Downtown Spokane Partnership and the economic development group's long-planned efforts to spruce up what it's calling the Division Street Gateway, a main entrance into the city from I-90.

"We didn't put a call out [for submissions] for this one because of the unique situation that he'd painted it a long time ago," Stiegemeier says. "We wanted to do something new there, but also give credit to and do something with the artist."

Quinn's new Spokane-centric mural should be completed sometime in October, while the four ongoing murals at the Maple, Howard, Cedar and Wall street overpasses are set to be finished by September.

Tom Quinn
These two panels, along with others, are going on the Division-facing side of the underpass.

Also on the topic of public murals — Spokane Arts just this morning put out a call for volunteer artists for a separate project it's calling the Mobile Murals Program. The inaugural project in the program is to create temporary art fences around Spokane residents' favorite downtown eyesore — the vacant, weed-filled pit at the corner of Division and Third.

With a goal to create a visually-pleasing barrier around the blighting site, local artists or artist teams are invited to submit their designs — to be painted or displayed on plywood panels — by a deadline of August 25. The panels are then set to be installed in early October. If mural space remains after this first round of submissions, a second call for more artists could be announced in September. 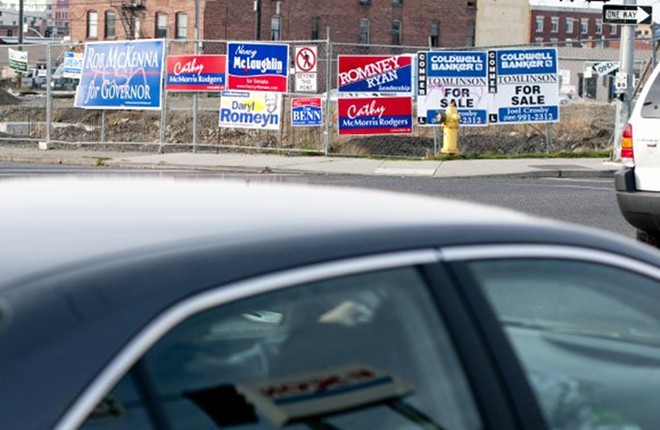 Christian Wilson
Not much has changed at Division and Third since 2012, when this photo was taken. Spokane Arts' new plan is to display art, instead of campaign signs, at the busy intersection.