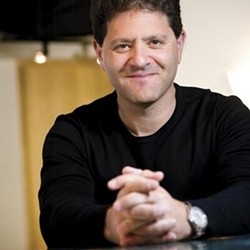 Nick Hanauer
Nick Hanauer is filthy, stinkin' rich. The Seattle-based venture capitalist and serial entrepreneur has started or funded more than 30 different companies. He was one of the first major investors in a small bookseller start-up you may have heard of: Amazon.com. Seven years ago, he sold one of his businesses, an Internet advertising company called aQuantive, to Microsoft for $6.4 billion in cash.

A self-professed "proud and unapologetic capitalist," he's also an unlikely advocate for raising the minimum wage and reducing income inequality in our country. Last week, Hanauer spoke with the Inlander over the phone ahead of his lecture this evening at the Fox Theater. The event, hosted by the Thomas S. Foley Institute at Washington State University, is free to attend and starts at 7:30 pm. For more information, click here. (His responses have been lightly edited for length.)

INLANDER: Your Politico Magazine article this summer, a memo to your "fellow zillionaires," and 2012 TED Talk on inequality both have gone viral. Why do you think your arguments have resonated with so many people?

The first reason is that economic inequality is a much bigger problem in our country than it once was. The income share of the richest one percent has tripled over the last few decades while everyone else’s income has stagnated, so ordinary people are feeling the effects of economic inequality in a more and more palpable and real way in their everyday lives. The subject is very much on most people's mind.

The second thing is that my argument is quite different from the traditional liberal, fairness-based argument, which is that we should feel sorry for people and pay them for that. My argument is a more effective and robust argument about the nature of prosperity and capitalist economics and the obvious connection between the money that workers earn and the sales that businesses enjoy. Pointing out the connection between those two things and the necessity of making sure workers earn enough to continue to support the businesses that form the backbone of our economy is just common sense. People who argue otherwise are just idiots.

Income inequality in this country is growing to historically high levels. CEOs today make 300 times more money than their workers. How did we get to this point?

It’s a combination of things. Part of the problem was a misunderstanding and misinterpretation of economic theory by policymakers. Some of this is a consequence of good-natured misunderstanding. Some of this is consequence of the pursuit by wealthy citizens of their narrow self interests.  For 30 years policy makers on the right and left accepted that trickle-down theory and they enacted policies that they thought would create general prosperity, and in fact, only enriched the already rich. What we're trying to do is point out that that’s idiotic. We’re trying to remind people that a thriving middle class is not a consequence of growth, it’s the source of growth and prosperity in capitalist economies.

In fact, your “middle-out” economic theory is based on your argument that trickle-down economics doesn't work. In nut shell, what's middle-out economics all about?

What policy solutions would you recommend for reducing income equality and helping grow the middle class?

A tax code focused on the middle class — where rich people actually pay more in taxes than middle class people unlike in our current system, where the $400 billion the government spends annually on tax exemptions theoretically to make people rich (which are simply rewards to rich people for being rich) are rather deployed to help middle class people become rich. A fairer split between workers and owners in the value of what business enterprises create by raising the minimum wage and ensuring middle class people are fairly paid and closing the gap between the pay of CEOs and ordinary workers.

In your Politico Magazine piece, you warn your fellow plutocrats that the "pitchforks are coming" as the rich get richer and the poor get poorer, noting that the United States isn't immune to the "same forces that started the Arab Spring—or the French and Russian revolutions." Do you think we really should be worried about some kind of social uprising?

At the end of the day, what history will show is if you concentrate power and wealth enough you will either have a revolution or a police state or both. That there’s only so much abuse ordinary citizens are willing to take. It makes little sense in a democracy to disenfranchise most people. Participation and inclusion are the most important things in an economy. The more people who are included, the better it goes, and democracy is the form of government that leads to inclusion, which is why it causes prosperity and why all prosperous places are democracies. But when you allow wealth and power to concentrate, you end up with an economy that isn’t inclusive. And that kills the economy.

Did the Ferguson thing scare you? It scared the shit out of me. That is what I’m talking about. That’s not about race. That’s about exclusion. That’s about disenfranchisement. That’s about a bunch of people who are excluded from the economy and they’re pissed. The thing that happened in Ferguson — that is what I'm talking about. These are people who are poor, angry, disenfranchised and poorly treated and not well politically represented, and so you have this powder keg situation where you have a bunch of white police officers trying to keep under control poor, angry people of color. Then something bad happens. And that can happen in Spokane where you live if we are not careful.

So what do your one-percenter friends have to say about your views?

I would say five years ago my views made my fellow one-percenters very angry and very defensive. Today, most of the wealthy people I know and associate with have in one way, shape or form come around to generally agreeing with my view. And I think the nation is making progress. Morgan Stanley, of all institutions, released a report stating economic inequality is the number one threat to the economy. The fast food industry is struggling. No one can afford to eat their stuff anymore. Walmart sales are flat and that's because when you don't pay for your workers enough to buy their stuff, that doesn't work out for anybody.

Is this a problem we can expect Congress to solve?

Oh jeepers. I would say forget about Washington D.C and focus locally. I see no hope for the federal government to do anything materially or constructively in the near term, but Spokane, Washington, could institute a higher minimum wage and should, for my money. That's where people's energy should go. Spokane could certainly use a slightly higher minimum wage, not $15 dollars an hour because the cost of living out there is much lower than out here, but you could certainly do more than $9.32. But me? I’m absolutely not thinking or worrying about the United States Senate.