How much will the city's switch to recycled paper really cost? 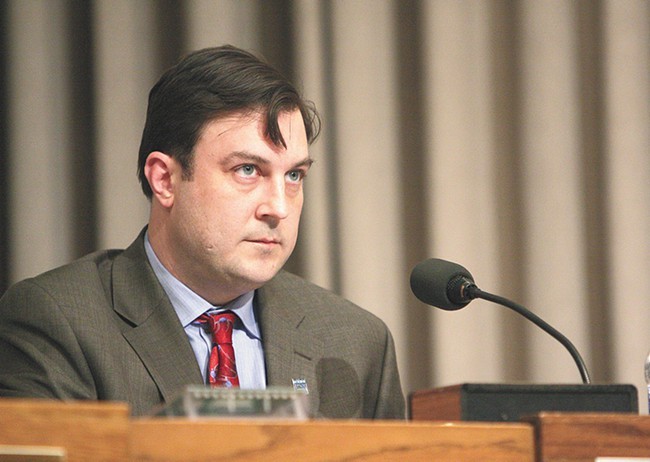 In a letter dated a few days before the liberal city council got its unofficial "supermajority," Mayor David Condon asked the council to form a joint task force to talk about money. He wanted to analyze how much any future policy change (including any council-proposed ordinance) would cost the city.

The council's response: No thanks.

"We're the legislature. We're a separate branch of government. We have our own process and procedure," Council President Ben Stuckart tells the Inlander. "If the administration wants to run the legislature, they should run for the legislature."

While the mayor and council agree on some things — Condon and most on the council are working to convince citizens to pass this fall's street levy and park bond, for example — their divisions have become increasingly clear as the council has become more liberal this year. One of those pressure points is around the council's push to make the city greener. Administration spokesman Brian Coddington says part of the mayor's desire for a joint group is the result of questions about the cost of a recent Stuckart-sponsored ordinance requiring the city to use recycled paper.

When Stuckart presented the ordinance at a council meeting in July, he cited figures he'd received from the environmental programs section of the city utilities department. The switch would cost the city about $8,900, he estimated. And if they switched to buying all paper products through one contract, they could save $3,000, bringing the total impact down to $5,900.

But now the administration is presenting a very different estimate of what the paper switch will cost: $25,000. That's according to the city's in-house print shop, which oversees the city's paper purchasing, Coddington says.

So how did two city departments come to such vastly different estimates?

Lloyd Brewer, who oversees the city's environmental programs, says it's about details. The estimate he sent the council was just for the basic copy paper the city uses the most: 8 1/2 by 11 inches, legal and tabloid size.

"It didn't include envelopes or other kinds of paper," he says. "I thought the direction they were heading was to write the ordinance just for that. They ended up writing the ordinance to cover just about any type of paper product we buy."

It turns out covering every type of paper in City Hall is not cheap. And that other piece — the one about saving money by consolidating how the city orders paper — may be a ways off. That's because different departments are at different points in ongoing paper supply contracts and because the city isn't sure where it could store all that paper.

"It's not something ... that's going to be able to be done in the shorter term," Brewer says. "It will likely be a year or a couple years."

(The law does include a caveat that recycled paper should only be purchased if it "performs adequately for its intended use and is available at a fair and reasonable price." So, how much leeway do departments really have in choosing the more expensive recycled option? Brewer says he expects clarification on that from the council or city legal soon.)

Councilman Mike Fagan, the group's outspoken fiscal conservative, says he's not sure the council should jump into a joint relationship with the administration to analyze every ordinance, but he's concerned about potential costs of the new council majority's priorities.

"I think these things are happening because of the direction of the council. The left has got the majority at this point and the Sustainability Action Plan was created by those that lean to the left," Fagan says. "I don’t really care about the Sustainability Action Plan and I don’t know what’s in it, but I have heard conversations that we’re just taking these planks one at a time. ... The taxpayer needs to know what’s going on. It's those guys we work for that are paying the bill."

For Stuckart, even $25,000, in the scope of the city's total $600 million budget, is worth the environmental value of switching to recycled paper. But to the administration, it's a warning sign.

"This is an example of why it's important to have a good discussion about the fiscal impact before you move ahead with an ordinance," Coddington says. "It makes sure everybody is on the same page and understands all of the ramifications."