Volbeat and Anthrax bring metal to Spokane Arena in April

After a seemingly endless series of announcements related to big-time country acts coming to play Spokane Arena during the building's 20th anniversary year, we finally have something a bit more, um, aggressive added to the schedule.

Today, Danish metal band Volbeat announced a spring tour through the western U.S. and Canada that includes a stop in Spokane April 27. Volbeat sold out a show at the Knitting Factory in the spring, so clearly the move to a bigger room for their next visit makes sense. Volbeat is touring in support of their Outlaw Gentlemen & Shady Ladies album. 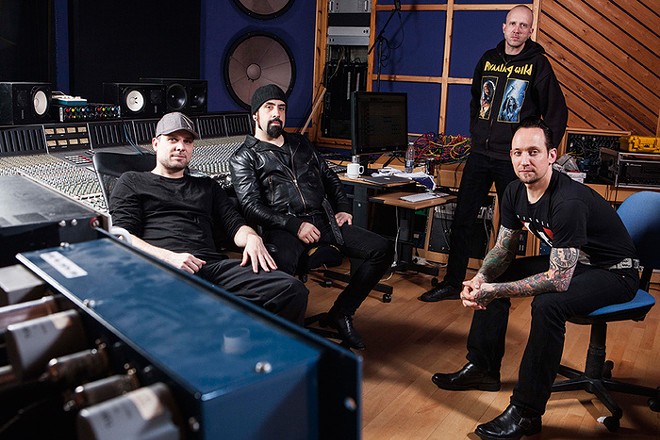 Volbeat
The presence of thrash-metal pioneers Anthrax on the bill is a good explanation of why the tour needs a room as large as Spokane Arena. One of the so-called "Big Four" of thrash along with Metallica, Megadeth and Slayer, Anthrax is still touring in support of their Worship Music release, featuring the return of original singer Joey Belladonna.

Anthrax's Scott Ian
The two bands share more than the ability to stir up a mean pit. Longtime Anthrax guitarist Rob Caggiano left the New York-based band in January 2013 — and is now a full-time member of Volbeat. Jonathan Donais of Shadows Fall replaced him in Anthrax.

Tickets for Volbeat, Anthrax and openers Crobot go on sale Friday at 10 am and cost $40.