The long Thanksgiving weekend offered ample opportunity to overstuff ourselves on sports action both local and national, and we did both. If you didn't have the chance to do the same, Monday Morning Placekicker will help you get up to speed in a hurry. Let's do this.

APPLE CUP BEATDOWN
Granted, I'm a newbie to the region, so I lack the historic perspective many readers will undoubtedly hold about the Apple Cup rivalry between UW and WSU. But I have a set of eyes and ears and a decent cable hookup, so I saw enough on Saturday night to know that the rivalry is looking pretty one-sided.

The score ended up 31-13, but it didn't look that close. UW jumped out to a quick lead and pulled away from there. The Huskies slapped the Cougs around and laughed all the way out of town, inspiring Cougs coach Mike Leach to shitcan his defensive coordinator and a linebackers coach on Sunday. That's understandable given some of the huge numbers the Cougars' D has allowed all season, but considering Leach's calling card is that of a mad offensive genius, scoring 13 total points long after the game has been decided doesn't look good.

The Apple Cup game could have been different. Frigid temps should have benefitted the Palouse gang against the UW west-siders, but instead the crowd stayed home in droves. The Senior Day festivities could have inspired the team, but instead Leach's insistence on always going for it on 4th down — and rarely making it — bit them on the ass. Quarterback Luke Falk didn't look good after a strong first few games, although we still think he'll be a good one going into next year.

The only thing that went right for WSU during the Apple Cup was the well-deserved enshrinement of Spokane native and Gonzaga Prep grad Steve Gleason into the Washington State Athletic Hall of Fame. 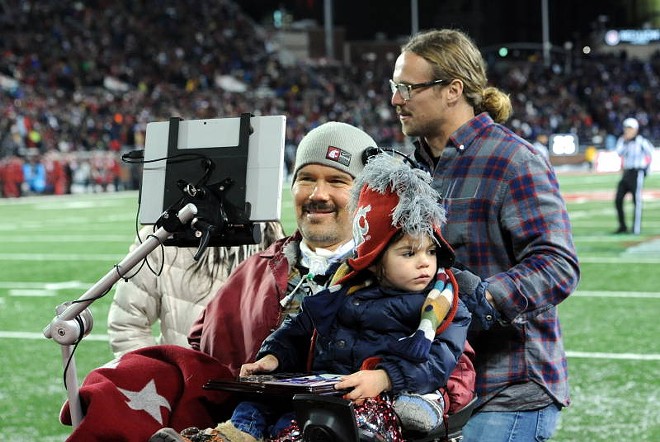 WSU Athletics
Steve Gleason being honored at halftime of the 2014 Apple Cup.
The best news for Cougar fans coming out of the weekend was that at least they're not Idaho; the Vandals finished up a 1-10 season with another blowout loss.

SEAHAWKS MOVING UP
No doubt most of you are aware by now that the Seahawks went to San Francisco and crushed the division rival 49ers 19-3. Even better, the division-leading Arizona Cardinals lost again, leaving the Seahawks just one game out of first place with four to play, including games against both the Niners and the Cardinals. It's suddenly looking pretty good for Seattle to get at least one home game in the playoffs.

ZAGS WIN A TITLE
The Gonzaga men's team went to New York City for Thanksgiving, and all they got was a lousy championship banner from the NIT Season Tip-Off tourney at Madison Square Garden. They were challenged by Georgia and St. John's at times, but the Zags cruised, Kevin Pangos was named the tournament's Most Outstanding Player, and the only player with any reason to be bummed at all is freshman guard Josh Perkins, who took a serious shot to the chompers and ended up with a broken jaw the night before Thanksgiving. Ain't that a kick in the head? He's out for a few weeks most likely.

SOUNDERS OUT
Seattle's soccer team saw its season come to an end at the hands of the LA Galaxy and retiring superhero Landon Donovan. And because it's soccer, the Sounders were actually eliminated after a game they won. This makes me very happy other sports don't use aggregate scoring. You go to a game in Seattle, you fill a stadium and rage all night, you beat a rival by a goal — and they celebrate on your field. It ain't right. (And you can save the "you just don't get it" bullshit, soccer fans).

BEST WIN OF THE WEEKEND
While absolutely no one was paying any attention. WSU's women's hoops team went down to Puerto Rico and beat the then-No. 8 team in the country, Maryland, on Saturday at the San Juan Shootout. Kudos, ladies!