This week, we tackled the strange slot/horse machine hybrids used to help bolster the dying horse racing industry. Legislators and Idaho's Indian tribes didn't raise much skepticism in 2013 when Idaho State Racing Commission director Frank Lamb described how the machines would allow bettors to view information on historical horse races, bet on winning horses, and then make money off of those bets.
click to enlarge 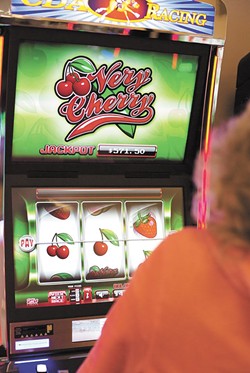 Frank Lamb, who championed legalizing machines like these, to help save Idaho's struggling horse-race industry, has retired.


But when the machines began showing up at tracks, full of spinning cherries and animated treasure chests, and horse race information typically hidden deep behind multiple menu screens, eyebrows went up everywhere. To the Coeur d'Alene tribe, it they looked like slot machines that didn't even bother to describe themselves as slot machines.

While Lamb has insisted he wasn't a cheerleader for the machine, we noted how Lamb, a regulator, championed what the machines could do.

"I can tell you since the inception of this in Arkansas, it has turned things around for Oaklawn Park," he testified in 2013. "It is amazing, the transformation. I believe it can do the same thing here."

Plenty had been written about Lamb's past on the Wyoming Pari-Mutuel Commission in 2003, when the Wyoming state supreme court ruled that similar machines were illegal. (The legislature later changed the law to legalize the machines.)

What wasn't known was that he was simultaneously being paid to lobby for a track in Wyoming, including advocating for instant-racing machines, while talking up the machines as commissioner in Idaho. The Idaho Statesman revealed that on Wednesday.

Today, the Statesman reported, he abruptly retired from the position.

Teresa Baker, spokeswoman for the Idaho State Police, confirmed the story. She says that in August, Lamb announced his retirement, and had planned to retire at the end of 2014. But he agreed to stay through the legislative session and help find his replacement. This week, as he and the Racing Commission were hit by controversy, he decided to retire immediately instead.

"He decided that it was getting to be a bit much," Baker says. "He doesn’t want anything to cast a shadow on anything the racing commission or the Idaho State Police does."

While a nationwide search has already been conducted for his replacement, a successor has not yet been chosen, and nobody is holding his seat in the interim.

Lamb's cell number, which had been working last week, has been disconnected.

A sampling of 12th Man deals for the weekend

CAT FRIDAY: Vote for best local cat in our 22nd 'Best Of' Poll