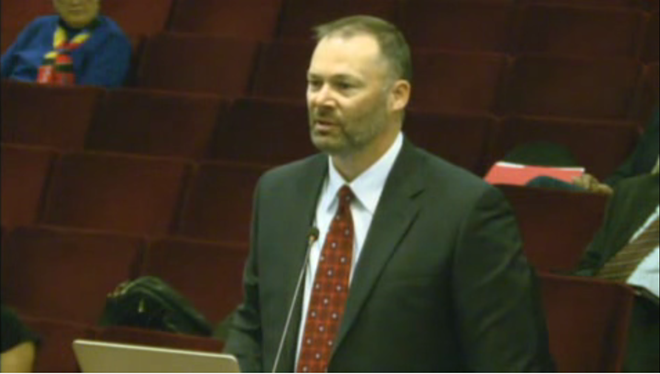 Okuniewicz began arguing that the machines were so similar to the "tribal gaming" slot-style bingo machines on the Idaho's American Indian reservations, as for the state's ban on imitation slot-machines to apply to both types.

“We’re either both OK or we’re both wrong,” he said. “The spinning reels have absolutely nothing to do with the game outcome. They’re simply there for entertainment.... The way our games work is in some respects, almost identical."

Tribal gaming, run by sovereign nations, are regulated through an entirely different set of regulations, such as the Indian Gaming Act and the state gaming contracts with the state, laid out in Idaho code.

But ultimately, the opposition to historical horse racing was pretty overwhelming. Many legislators felt duped when they approved them in 2013. "What was represented to them then was not clearly what was represented now," Rep. Melissa Wintrow said in the hearing.

They were told the machines would, essentially, simulate a horse race. Bettors could find out horse handicap information, bet on the best horse to win, and then watch the horse race. Technically, that's still possible. But horse racing is about a big a part of most the actual racing machines, as a "please drink responsibly" message on a beer ad.
click to enlarge

On most machines, the handicap information is hidden behind numerous menu screen layers, and as soon as it's accessed it disappears. The race itself generally displays only as a three-second snippet, as cherries and treasure chest reels spin. Most just hit an auto-wager button, and watch the reels spin.

When we tested the machines at Greyhound Park, even the Park's employees didn't know how to access the more detailed information.

That led to a moment at the legislative hearing, where Okuniewicz blamed the person demonstrating the historical horse racing machines from doing it all wrong. "The person who was operating the device was not operating it correctly, and couldn't get to the place where he could manually select the horses and see handicapping info," Okuniewicz said. "The first thing I would do is to get a better expert, who could operate the machines correctly."

Coeur d'Alene Tribe sent a letter to the governor and attorney general urging them to put a stop to the use of the machines. Unsurprisingly, they've praised today's bill.

"We know this was difficult for some with so much riding on the outcome and we appreciate that they took the time to thoroughly examine the matter and separate facts from emotion," said Chairman Chief Allan of the Coeur d'Alene Tribe in a statement.

But the question looms: What happens now for Greyhound Park? During the hearings, Okuniewicz was asked if horse racing in Idaho could continue to exist without funding from other sources.

"I would submit that no," Okuniewicz said. "I think that, at least in our case, for example, we've been hanging around at a loss for a years, for just this type of opportunity. If it's repealed I'd anticipate that we would be going another direction, and not having wagering."

We have a call in to Okuniewicz to ask about the fate of Greyhound Park, and we'll update this post when we hear back.