Welcome back to Weed Wednesday, your weekly dose of pot news. Wondering what this is about? Click. Looking for our previous marijuana coverage? Click. Got a question or tip? Email me at: jaket@inlander.com

Late last year, Congress passed a massive spending bill that contained just a few lines of text that was intended to send a clear message: Federal law enforcement agencies need to quit interfering with state medical marijuana programs. To that end, a paragraph included in the bill stated that no funding was to be used by federal law enforcement agencies to interfere with medical pot in states where it’s legal.

The legislation, signed into law by the president, had particular significance for the Kettle Falls Five, an Eastern Washington family that is facing serious federal drug charges (under which pot is completely illegal) for growing marijuana that they assumed was legal under their state program.

With Congress sending a message that they don’t want federal law enforcement going after medical marijuana, the family’s lawyer filed a motion last month to dismiss the case. The motion argued that the prosecution was in conflict with congressional intent, and it cited floor speeches by members of Congress stating that people using medical marijuana under their state law should be left alone by the feds.

But the prosecutors haven’t given up yet.

A response filed by U.S. Attorney Michael Ormsby on January 29 argues that the family shouldn’t be off the hook because there is evidence to show that the family was actually running a criminal for-profit operation under the guise of medical marijuana.

Citing floor speeches from members of Congress who supported the amendment to the budget bill, Ormsby argues that the legislative intent was to protect physicians and patients prescribed the drug from prosecution.

“It is clear that there is still a political debate regarding marijuana,” reads the response. “This amendment has said nothing about the Controlled Substances Act so it is clear that it is still a violation of federal law to manufacture or distribute marijuana. The new law is intended to help patients and doctors and promote research into the uses of marijuana. It is not intended to protect or shield criminals from federal prosecution.”

Washington isn’t the only place where the feds continue to pursue cases against medical marijuana operations despite recent actions by Congress. The Huffington Post reports that in Oakland, federal prosecutors are trying to shut down a medical marijuana collective.

To add more uncertainty to the mix, the president has nominated Loretta Lynch, a career federal prosecutor, to be the next attorney general. Although Obama has made some comments that marijuana is no big deal, Lynch has made comments to the contrary. While, it’s not clear what her likely confirmation will mean for federal drug policy, pot advocates aren’t spooked.

To add even more uncertainty, U.S. Surgeon General Vivek Murthy has publicly said that medical marijuana “can be helpful.”

Officials in Idaho are considering legalizing cannabis oil for medical purposes in the state. The oil has shown some promise in treating seizure patients.

In response to an announcement from the federal government that tribes can grow and sell marijuana on their lands, over 100 have shown interest.

President Obama’s budget clears the way for weed legalization in the nation’s capital.

The Seahawks may have lost on Sunday, but here’s a logo of the team made out of pot.

The Boston Globe has a story on Jeb Bush, a former Florida governor and member of the Bush political family who is considering a run for president, on his time at an elite boarding school. The article states that Bush smoked pot while at the school and was a bit of a bully. When asked about being a bully, Bush told the paper that he can’t remember.

U.S. Senator Rand Paul of Kentucky and possible GOP presidential rival says that Bush is a hypocrite for supporting hardline policies on pot given his use of the drug.

The Nightly Show really, really screwed up its vaccine episode

Dave's not here, man, but Cheech & Chong are coming to Idaho 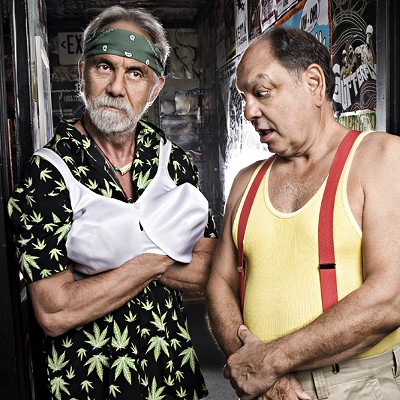