U.S. Sen. Rand Paul, a man who loves freedom so much that he once considered using a catheter to facilitate a 13-hour filibuster on the floor of the Senate, came through the Inland Northwest to drum up support for his bid for the GOP presidential nomination.

The freshman senator from Kentucky spoke in both Spokane and later that day in Coeur d’Alene Wednesday, and Boise today, to deliver his libertarian-tinged message of embracing the entirety of the Bill of Rights (not just the 2nd Amendment), expanding his party's reach to the poor and minorities and reducing government spending. 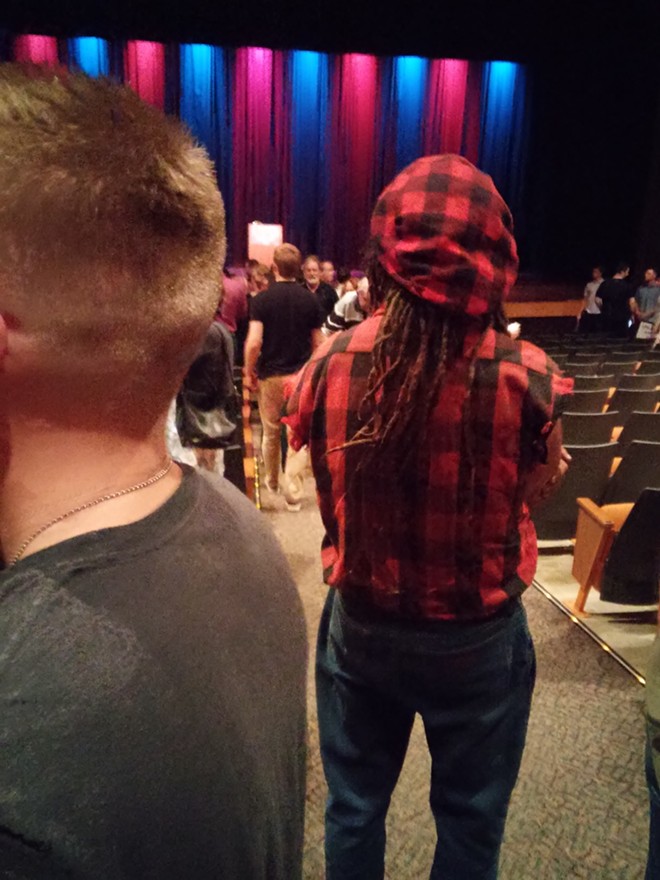 Jake Thomas
White guy with dreadlocks at a Republican event
U.S. Rep. Raúl Labrador, an Idaho Republican who chairs Rand's Western States campaign, warmed up the crowd, telling them that the senator was a genuine conservative and that you can’t just speak to the angry people if you want to be elected president. Paul, said Labrador, is even so revered by U.S. Transportation Safety Administration agents at airports (normally the scourge of libertarian-leaning individuals), to the point they might even start a group to support him.

Paul took the stage and began his speech by telling a story of how earlier that day he asked some locals what “Couer d’Alene” meant. Initially, Paul incorrectly thought it meant “heart of an owl,” not “heart of an awl,” an expression traders used to describe the shrewd trading practices of Indians that inhabited the area.

Paul took the expression to mean having no heart, adding, “Oh, you could have just said Harry Reid,” referring to the Senate minority leader, a line that drew laughter.

During his speech Paul took aim at federal spending, saying that both Democrats and Republicans use the government as their “own special piggy bank.”

“Do you think a government employee can really distinguish between a thousand and a million dollars or between a million and a billion?” he said.

He also took aim at his own party.

He took aim at the debt.

“You ask yourself how did we get into this fix? What goes on that allows spending to go on unabated at such a degree. Well, it’s an unholy alliance between two factions. One faction says we should spend everything and anything on the military without limits. The other side says we should spend everything we can spend without limits on welfare. You know what happens they get together, and then you have unlimited spending on both.”

On currency: “Of all the nations, our dollar is the cleanest shirt in a closet full of dirty shirts.”

The tax code: You know what I say is let’s get rid of the whole thing, the IRS included.”

The economy: “If you want to get money into your economy, give it to the people who are selling something in the economy who are succeeding. Why? Because you all voted for them.”

He also took aim at foreign aid, noting how he sponsored an amendment that would have halted giving money to countries that persecuted Christians for going against the state religions.

“And we know what state religion we are talking about.” (Hint: It’s not Quakerism.)