How The Daily Show made the late-night talk show irrelevant 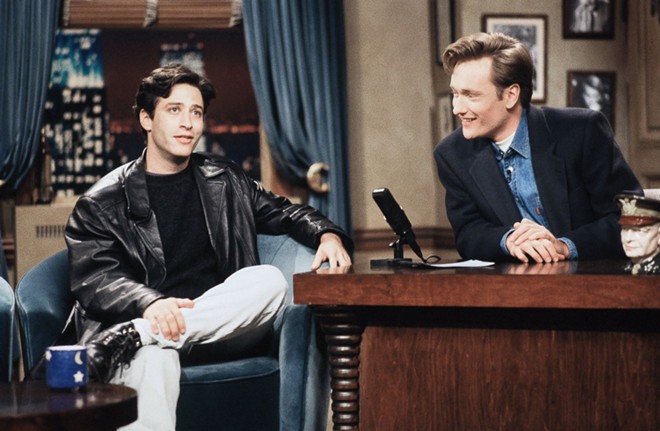 Oh, how the tables have turned.

Hear all that wailing and gnashing of teeth? Yes, Jon Stewart, after 17 years, plans to leave The Daily Show with Jon Stewart.

When I was kid, not having a TV, I used to log on to the computer in the mornings, and pull up a NotePad-simple page that listed the one-liners of late-night talk show hosts like Jay Leno and Conan O’Brien. I chuckled lightly at them, but their insights didn’t get much more insightful than “George W. Bush is dumb” and “Bill Clinton sure does like young females.”

This was what we had to subsist on for political TV comedy before Stewart showed up.

Late night talk shows were all about hanging out. The host basks in the laughs, lets the band play rim shots, he may repeat the punchline a few times to stretch out the laughs. The interviews are heavy on fluff and anecdotes and a few light jokes. That went for Leno, yes. But it also went for Ferguson and Conan and all the other beloved hosts.

But if late-night talk shows focused on leaning back — chillaxing, as it were – Stewart’s Daily Show focused on leaning forward. It was aggressive, ambitious, sometimes furious. It didn’t wait for laughter to subside before surging forward with the next joke. It delved into complicated issues that even Actual TV news programs didn’t dare to bore viewers with.

And so for us, the late-night talk show — the type Daily Show-alum Stephen Colbert will soon host — became obsolete. We don’t want lazy jokes and fall-asleep-with-the-TV-on rhythms. We want something quick, biting – even educational — and with the Daily Show, we knew it was possible.

Like any show, the cracks and seams of the Daily Show have shown after 15 years. With the occasional exception, the correspondent pieces rarely again reached the height of the Stephen Colbert years. Stewart’s outrage over Fox News frequently got repetitive, more fatigued than insightful or humorous.

But at its best, The Daily Show was newsier than newscasts and funnier than late-night talk shows. With Last Week Tonight, Stewart-protégée John Oliver took Stewart’s strength to its logical conclusion, diving deeper and wonkier and ditching the celebrity-talk portion.

Plenty will eulogize the still-alive Stewart for his Crossfire rant or his Rally to Restore Sanity, but neither, from my view, represented Stewart at his strongest. That would be Stewart, in 2013, repeatedly ripping into the bureaucratic backlog at the Veteran’s Affairs office. The bulk of the reporting wasn’t Stewarts, but his show shone the national spotlight on the issue it deserved. He could articulate the anger we should be feeling, without diluting it with News Magazine Gravitas.

Before Stewart, it seemed like TV had to choose between the vegetables of hard wonky news and the cotton candy of late-night talk show comedy. But Stewart showed you could pan-char the vegetables in butter, toss in some diced shallots, sprinkle on some sea-salt and fresh tarragon, then squeeze a lime over it, and have something healthy, yet more delicious and addictive, than late-night talk-show fluff.