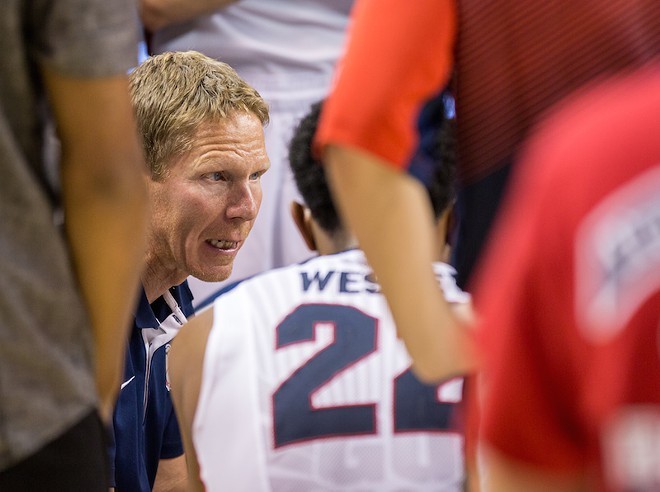 BYU spoiled Senior Night for the Gonzaga Bulldogs. Absolutely ruined it. Put a damper on a spectacular season.
So how did the Bulldogs handle their disappointment Saturday night? With nothing but class.

“I know you’re disappointed,” coach Mark Few told the sellout crowd at the McCarthey Athletic Center after BYU won a 73-70 thriller. “So are we. Today, BYU played a heck of a game.”

Despite losing a school-record 22-game winning streak and a nation-leading 41-game home winning streak, the Bulldogs won the regular-season championship of the West Coast Conference for the 14th time in 15 years. The third-ranked Bulldogs carry a 29-2 record (17-1 WCC) into the conference tournament, which opens Friday in Las Vegas. Gonzaga has a first-round bye, then plays Saturday.

Regardless of how they fare in Las Vegas, the Bulldogs are assured of playing in the NCAA tournament for the 17th consecutive year. Gonzaga’s three seniors — starting guards Kevin Pangos, Gary Bell Jr. and Byron Wesley — have played key roles in Gonzaga’s magical year.

Described as “unbelievably special guys” by Few, the three seniors were greeted by family members at center court prior to the game after walking down an aisle through the student section. Afterwards, the players addressed a crowd that was chanting and roaring even after the defeat.

“This whole year has been amazing,” said Wesley, who played at USC the previous three seasons. “I’m sorry we didn’t pull through for you tonight. You guys have been amazing. This has been the best year of my life.”

Bell took the microphone and said, “Obviously, we’re sorry we didn’t win tonight. We’re going to use this to fuel the fire.”

Pangos, a fan favorite who has started alongside Bell the past four years, informed the fans that they are “the best in the country.” He hopes the same can be said about his team at season’s end.

“We’re going to have a special journey,” Pangos said, “so stick with us.”

The Bulldogs’ play has been spotty of late at both ends of the floor.

“I’m concerned,” Few said, “but I’m concerned all the time. That’s pretty much the state of mind I’m in all season.”