Last night, Spokane City Council unanimously passed an emergency ordinance that places a six-month moratorium on the construction of new cell towers in residential areas of the city - and it’s expected to get the city sued.

The ordinance was crafted in response to concerns voiced by residents that new towers were popping up in their neighborhoods with little notice and even less recourse if they objected to the structures.

The newly passed ordinance halts the establishment, permitting and franchising of new cell towers in residential areas (on both public and private property) for a six-month period, during which city council will consider a more comprehensive approach to at Spokane’s technology infrastructure.

Stuckart noted that he had been working on an ordinance that would give residents notice that potentially ugly and unwanted developments like cell phone towers would be sited close to their homes. The moratorium goes further by halting the development of the offending structures altogether.

Mike Piccolo, legal counsel for the city’s legislative body, warned that the ordinance will invite a lawsuit, but members of the city council seemed to think it was worth it.

“Oh, we will get sued,” said City Council President Ben Stuckart, who went on to add that, “I think it's important, and I think in this instance we should fight for our citizens.”

Allen, speaking after the meeting, said that under Washington state law, if a business follows development rules they are considered “vested” and would have grounds for a lawsuit if a government entity suddenly changed the rules midstream.

Under the ordinance, companies could still apply to build towers and any applications that are under six months old could still go forward.

During the public comment period, no representatives from telecommunications companies showed up to complain. Instead, residents spoke of how they got notices that a cell tower was going to be placed in close proximity to their home and they weren’t given adequate notice to object. Many praised the council’s actions.

“Rarely am I speechless,” said Patricia Hansen, a South Hill neighborhood activist. “Tonight I am speechless.” 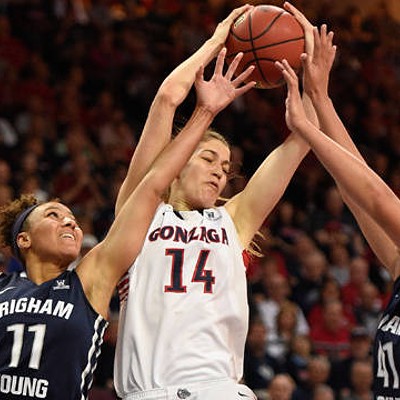 Gonzaga women take an unexpected early exit in Vegas, NCAA up in the air