Inside the Eastern Washington vs. Georgetown matchup 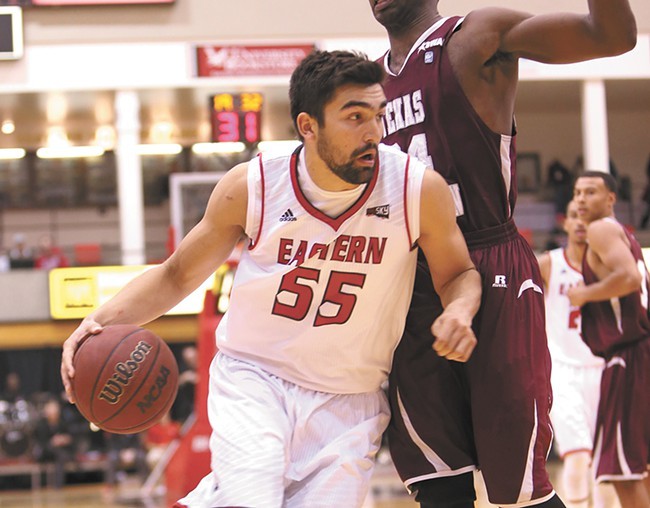 EWU athletics
Eastern Washington forward Venky Jois.
The glistening Moda Center, home of the NBA’s Portland Trail Blazers, provides a big-time setting for a big-time game that just might vault the Eastern Washington basketball program into the national spotlight for years to come.

The Eagles take on 22nd-ranked Georgetown in the second round of the NCAA tournament Thursday (approximately 7 pm, truTV, ESPN 700 Radio). A crowd of 17,000 or more, the largest ever to watch an Eagles basketball game, is expected to be on hand.

The Eagles rank among the most prolific 3-point shooting teams in the country, but defense can be something of an afterthought. The Hoyas are a bigger, more physical team that stresses defense.

Online media created a buzz earlier in the day by running a headline that said Eastern coach Jim Hayford “guarantees” a victory over Georgetown. It turns out that Hayford was on the team bus when he predicted, “We’re gonna win,” during a national radio show.
“I knew the 15 guys (players) on the bus were listening to that,” Hayford said. “I want my team confident.”

10 POSITIVE NUMBERS FOR EWU
3 – National rank in points per game (80.8) among 345 Division I teams. Georgetown ranks 87th at 70.7.
19 – National rank in field-goal shooting percentage (48.0). Georgetown is 80th at 45.5.
22 – Years in the past 30 when at least one No. 13 seed defeated a No. 4 seed.
5 – Consecutive NCAA tournaments in which Georgetown has lost to a double-digit seed.
22.9 – Points per game for Division I scoring leader Tyler Harvey.
3.9 – Harvey’s 3-point field goals per game, which also leads Division I.
60.8 – Field-goal shooting percentage for Venky Jois, who ranks seventh in Division I.
154 – Difference in 3-point field goals by Eastern (335) and Georgetown (181).
4.9 – Blocked shots per game for Eastern, the same as Georgetown.
1 – Eastern and Georgetown victories this season against Indiana, their only common opponent.

The Inlander is all over March Madness