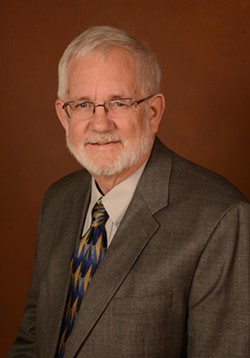 Ed Pace isn't a fan of tax increases, but this is an exception

Ed Pace, like most sitting on the deeply conservative Spokane Valley City Council, isn't a fan of raising taxes. He's voting against the STA ballot initiative, even though he likes the plan. He's against the gas-tax increase that Republicans supported to raise transportation funds. He's in favor of lowering the Valley's property tax by one percent.

"Were going to be looking at lowering the gambling tax," says Pace, a retired Lutheran pastor says. "I believe in the reality of sin, but I don’t believe in sin taxes. That’s social engineering."

So why'd he vote for a 1.3 percent increase in lodging taxes this month? For a couple reasons, he says.

1) The tax has a specific purpose

The lodging tax on hotel rooms increasing from 2 percent to 3.3 percent gives Spokane Valley about $500,000 extra to work with, but only for specific projects.

"The money will not go to the general fund. It will not go to making government bigger," Pace says.  "It will go into a savings account for now, for some [future] capitol expense that will be for promoting tourism for Spokane Valley."

The plan is to use it to build something, or some things, to help turn the Valley into more of a destination.

"It will benefit the community," Pace says. "It will attract people to community. They’ll stay at hotels, they’ll shop at stores, they’ll eat at restaurants. It will bring money into the local economy. That’s real money, based on business not on government grants. That’s why it’s okay."

Unless they get a hotel room, Spokane Valley citizens won't be hit by the increase. It will be tacked directly onto hotel bills, which hits mostly visitors. "We're taxing people who're coming through," Pace says.

But drawing on his own frugal experience during road trips, he doesn't think the higher bills will deter tourists. "We’ve already saved money by picking the right hotel," Pace says, a few dollars extra won't matter.

The Spokane Regional Sports Commission has proposed a $27 million "Sportsplex" located downtown, on the north bank of Riverfront Park.

To Pace the idea is a "boondoggle."

Instead, he suggests that the Valley use its increased revenue from the lodging tax to partner with the sports commission, the local school districts, the Spokane Valley Chamber of Commerce and other groups to create a more modest sports facility, say, a stadium and a series of fields, located in the Valley instead.

"If we have more fields, we would get more people coming in and spending money," Pace says. "This is a win-win with the school districts. If they don’t have to build a big sport complex stadium, they can use this instead. It’s cheaper for everyone. It’s just a huge win-win."

But wouldn't the Valley building its own sports complex kill plans for the Sportsplex downtown?

"That’s their problem," Pace says. "We need to do the right thing for Spokane Valley."

Let the Hoopfest hype begin: The new poster is out

The measles are back in Spokane County… what now?