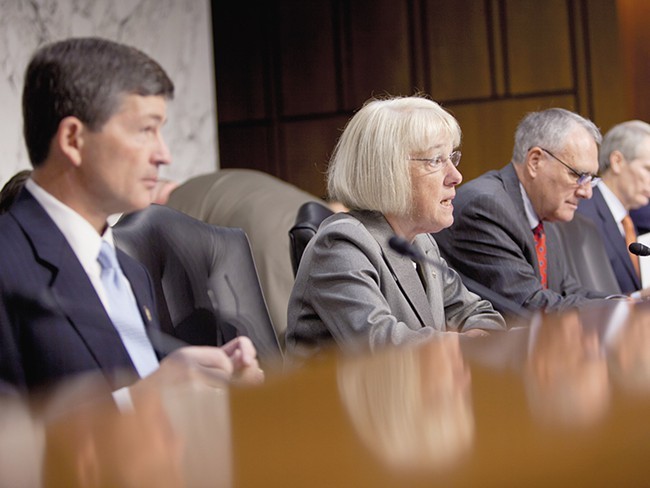 Sen. Patty Murray, negotiator
Last week, we published a story about how Washington Democratic Sen. Patty Murray, despite her far-left ideology, has managed to become a unique force of compromise and deal-making in Congress. Here are a few additional selections from the interview.

On the environment that made Republicans willing to negotiate with her:


They got so stuck in a philosophical debate in their own turf, that they put us — if you will recall — into a government shutdown, sequestration taking place, people across the country wondering if we could even do anything in this country, wondering whether our democracy worked. Two businesses who were finding their international partners were not trusting our country to be able to do what we needed to do to manage a country.

On how Murray and Ryan built the trust for compromise:


We had been talking, long before we’d ever got put into a room, to get to know each other. Who you are, what brings you here, what’s important to you? Knowing what’s important to somebody creates the groundwork to be able to listen to someone and trust them.

But the other thing is, inside that room, we had a really important agreement that what we talked about, that what we agreed upon, wouldn’t be used against the other person. And that trust is essential when you’re trying to work out a compromise. You have to put things on the table and trust that the person won’t go out and hold a press conference and say, “You won’t believe what Senator Murray was giving away.”

I think we were in an atmosphere before that time where the two sides were yelling from opposite sides of the football field, and not really trying to find common ground. One of the things we actually talked about as we put together an agreement was, how do we show that compromise can be awarded and supported and applauded, rather than compromise being something that everyone says, “I won’t do.“


On the Trans-Pacific Partnership, the trade deal that Sen. Elizabeth Warren has heavily criticized.


Well, that’s an issue that is one that I absolutely look at what’s important for my state … We have a state that is very trade-based. And our ability to be able to make products or grow products and sell them in a global marketplace is absolutely critical to the economy of our state and for many, many families and businesses. I look at that agreement, and say, “Does this set the best path forward for our state?” And I think the current legislation that is before the Senate … meets those parameters, and it’s important for our state.


On where she draws the line on abortion’s legality:


[Later, Murray's spokesman clarified that Murray was referring to the limitations of Roe v. Wade specifically, and has previously expressed willingness to support partial-birth abortion restrictions if they included protections for the life and health of the mother.]

On where she’ll never compromise:

On what comes next:


The next few months are going to be really focused on getting No Child Left Behind fixed, and through congress, and to the  president's desk.

Also, the budget which is in front of us, the agreement I and Paul Ryan came up with, ends at the end of this year. In order to move forward, we need what many people are calling a Murray-Ryan Part II. Which would be an agreement that fits those principles of replacing sequestration, both defense and non-defense equally, and making sure that we have both cuts and revenue in it, so that we do it in a fair and balanced way, and we're not just passing a budget that benefits the wealthy, but a budget that actually benefits all Americans. Which is what our country is about.