Matthew Salzano
At some point, the English folk-rock band Mumford and Sons decided it was boring to just do the average Grammy award-winning, multi-platinum artist thing: sell out arenas or headline a few of the world’s biggest festivals. They would much rather do their own thing.

They would be Gentlemen of the Road. They would tour around the world, from the U.K. to North America to Australia, and visit small towns with no arenas. They’d access the entire community to celebrate its history, culture and especially, its beer. Plus, they’d bring some of their most talented friends. They've done that 15 times (to great success) since 2012.

Over the weekend (August 14-15), it was Walla Walla’s turn to host Gentlemen of the Road. The 2015 stopovers were already going to be special, featuring nine other great musicians including tUnE-yArDs, the Flaming Lips, Dawes and the Vaccines, but Walla Walla was uniquely visited by another set of Washingtonian gentlemen: Foo Fighters.

On the windy, dusty and hot weekend in Walla Walla, we slept in a tent, laughed as out-of-staters giggled at the slogan “A town so nice, they named it twice!” and enjoyed a truly excellent festival.

Here’s what we saw, heard and thought through two days of live music in the heart of Washington’s wine country.

Phillip Bax
The main attraction. The four members take their normal stance: on stage in a row, a strip of neon light running the edge of the stage, the men remaining hazily back-lit  in blues and reds – amidst the cloud made from Marcus’ cigarettes, the crowd’s marijuana and the stage’s smoke machines.
click to enlarge

Matthew Salzano
Then, the Mumford and Sons' version of a dubstep bass drop hits, the lights go up, the horns blare and the crowd goes insane.
click to enlarge

Matthew Salzano
The upbeat folk-rock from Mumford and Sons’ first two full-length albums, Sigh No More and Babel, have always played well to any crowd who came to party with the English boys. When I saw them at Sasquatch in 2013, it was one of the highlights of the weekend – a wonderful mix of sing-along, jumping tracks and gentle, subtle ballads which showed the range that made the band so successful. This presence was certainly still there.

However, there was a new element at this 2015 Stopover in Walla Walla – Wilder Mind came out in 2015 with a very different sound, more like Coldplay, featuring no banjo and a full drum kit  to mixed reviews. Tracks from the new album, decidedly less folksy and many lower-energy, still left the crowd of fans extremely satisfied. However, the crowd clearly showed less enthusiasm for songs from Wilder Mind than the folksy back catalog. 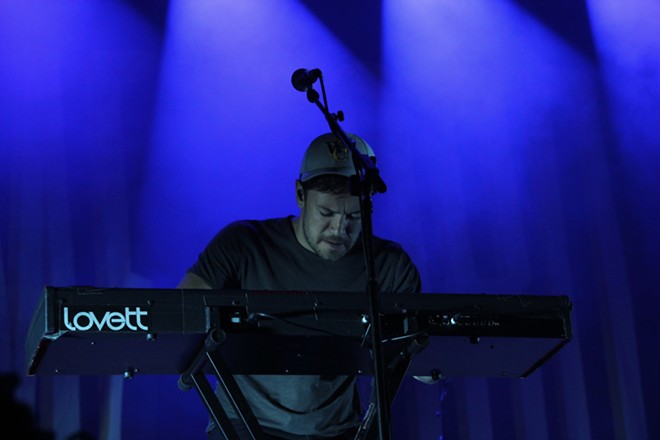 Matthew Salzano
Ben Lovett, who is primarily a keyboardist and vocalist, wore a baseball hat from Walla Walla's own Whitman College.

Less enthusiasm is relative, though. When the crowd, between 20,000 and 30,000 people according to reports from The Oregonian and speculation from festival staff, is at 110 percent for “Dust Bowl Dance” and “Lover of the Light,” 10 percent less for newer tracks “Believe” and “Wilder Mind,” it still makes for a grand time.
click to enlarge

Matthew Salzano
It’s important to note that not only are these four men excellent performers and musicians who are a joy to watch live, they’re obviously passionate about music and the people who love it. 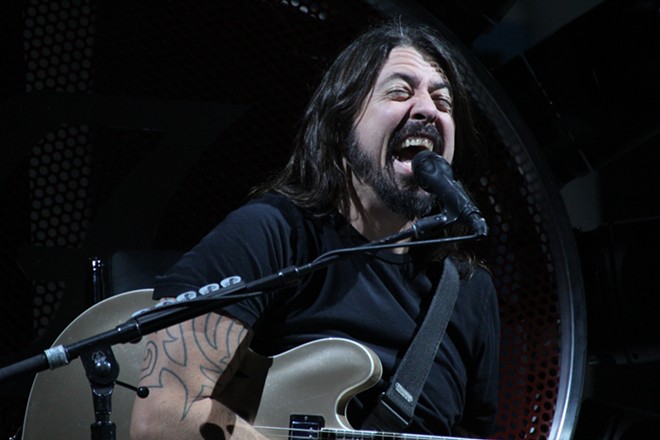 Matthew Salzano
"We've been a band for 20 f—-ing years," Grohl says, "And we've never played Walla Walla!"
If you’re not following Foo Fighters right now, you might not know that legendary frontman (and Nirvana drummer) Dave Grohl broke his leg during a June show in Gothenburg, Sweden. They’ve since named their tour “The Broken Leg Tour,” and Grohl spends the show front and center on a one-of-a-kind, rock 'n' roll throne, complete with the Foo Fighters' logo and guitar necks.
click to enlarge

Matthew Salzano
It would be easy to assume that a performance by a relatively hard-rocking band with its frontman temporarily limp and seated would lack some liveliness, but that was absolutely not the case for Grohl and his band. Their set was the longest of anyone at the stopover, clocking in at almost 2 hours and 30 minutes.
click to enlarge 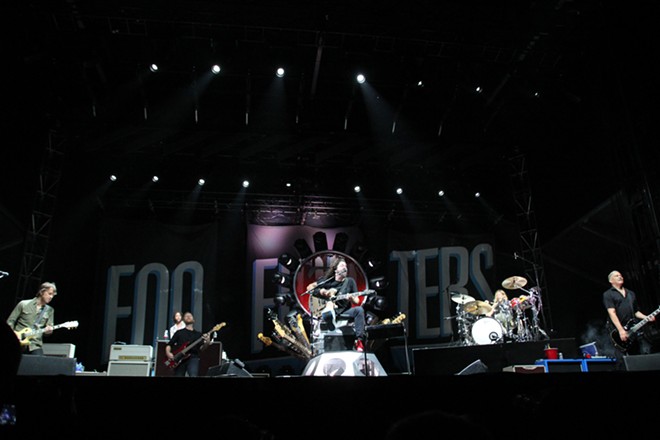 Matthew Salzano
Grohl was clearly having a great time – his leg kicks and head thrashing increasing in frequency as alcohol flowed throughout the evening. “We have a rule as the Foo Fighters. We aren’t allowed to start drinking until an hour before the show,” he says, pausing as his head lightly bobs from side to side, dramatically pointing out at the sea of mostly white people. “Because we’re professionals. Well, today we started at, like, 2 pm.”
click to enlarge 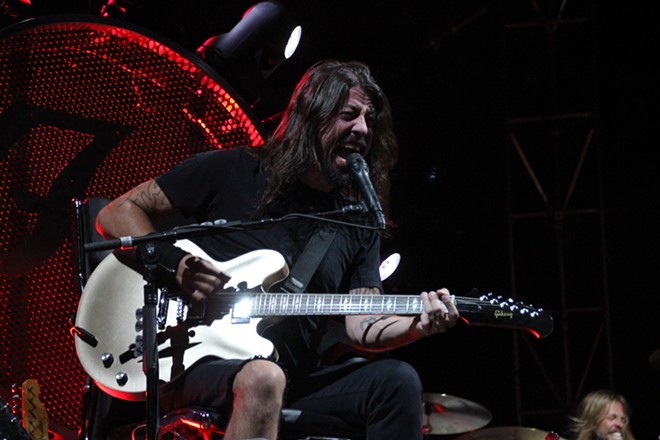 Matthew Salzano
Champagne was spilled, covers were sung (“Under Pressure” was the highlight) and no one left the field without an appreciation for the showmanship of  the Foos.

Matthew Salzano
As the Flaming Lips set goes up, a group of crew members attempted to sneakily place a large balloon behind a huge poster onstage. The crowd can make out a favorite four-letter word and three other words, presumably less vulgar, underneath it. It’s easily forgotten about when a giant arrow made of similarly large, shiny silver balloons is brought across stage.

Another distraction: Lead singer Wayne Coyne, whose outfit was mostly made of duct tape and well-placed pom poms, walks onstage. He leaves and the band is introduced. Coyne is back, with that huge arrow.

Phillip Bax
On a second attempt in the breezy evening, he gets the balloon out over his head and into the stunned and clearly entertained crowd.
click to enlarge

Matthew Salzano
I focus back in on stage, seeing two mushrooms (think Toad from Mario), a rainbow and that mysterious sign from before.
click to enlarge

Matthew Salzano
“F—- yeah Walla Walla,” the balloon sign reads. Coyne throws it into the crowd. The sea of people jump into action and begin to rip the exclamation apart. And just when it seems it can't get any weirder...
click to enlarge

Matthew Salzano
Yes, it can. And it was absolutely fantastic. After explosion upon explosion of colorful confetti left the entire grounds a mess and the crowd in a complete tizzy for Mumford and Sons, the Flaming Lips proved effective, hilarious, energetic and downright awesome.

A FEW OTHER FAVORITES

Matthew Salzano
tUnE-yArDs featured the most women of this “Gentlemen of the Road” tour – four out of five, including the drummer. (Diversity was a bit lacking in this crop of mostly white male performers to an almost entirely white audience.) But they also had the most unique sound in the midst of bands that were somewhere between the original, folksy sound of Mumford and Sons and the rock of Foo Fighters. Their Afro-influenced, noise-driven, experimental electronic indie-pop music had the crowd jumping, clapping and singing along. Check out “Water Fountain,” from their most recent album, Nikki Nack. 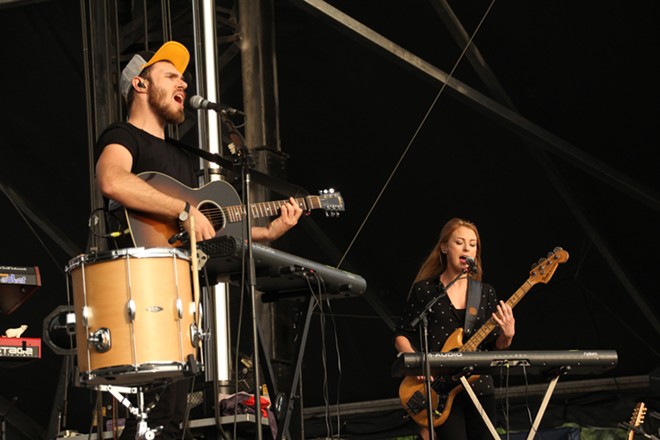 Matthew Salzano
I expected McMorrow to be like the Tallest Man on the Earth – alone, acoustic and crooning.  But he surprised with a full and pleasant sound that both satisfied the inner hipster (especially because he remained barefoot the entire show) and 20-something concertgoer who wants to dance.

Phillip Bax
It’s going to be a great show when the lead singer walks out looking like the love child of Elvis Presley and the Care Bears. Everything was carefully designed to match an equally bright and easy-to-listen-to sound. Lewis was extremely interactive with the crowd and her bandmates, at one point beckoning a female vocalist to meet her at the edge of the stage to seductively duet just a few feet from the crowd.