A colorful addition to a once-bedraggled alley behind Barrister Winery 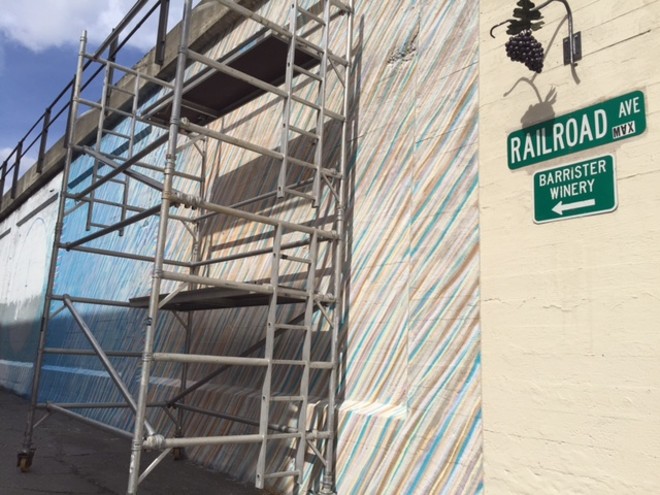 The wall behind Barrister Winery, at 1200 W. Railroad Ave., is receiving a major upgrade. Once described by one owner of the winery as a “bedraggled” alleyway, the prominent wall will now be clothed in a beautiful mural. 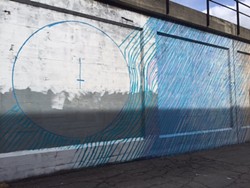 As part of the Spokane Arts Downtown Mural Project, artist Addison Karl, who goes by simply "Addison", began the mural on Saturday, Sept. 12. Addison will leave his mark on the city of Spokane with a horizontal, hatch-line mural using spray paint. The mural will consist of countless diagonal lines, intersected by four large circles of color throughout the canvas. The lines will range through different colors from right to left, beginning with light colors, through a full range of blues, purples, reds,  and oranges.

According to Addison, this mural is highly theory-focused.

"This project is based on structural color theory," Karl said. "On this one I really wanted to focus on the theory of color and how it interacts. And the way that I paint with hatch lines, it’s static color but your eye blends it into a singular color family. This theory is called the Bezold Effect, which was used by the impressionist painters."

The Bezold Effect states that a color can appear different based on the colors present around it. This theory is a key foundation in Karl's mural, which blends colors throughout in order to give the viewer the perception of different colors. Because the mural is so great in length, the process has taken Karl longer than he anticipated. Despite originally giving himself ten days to complete the mural, Addison thinks that he will likely be in Spokane for a couple of extra days.

Hailing from Berlin, Germany, Addison Karl is known for his hatch-line technique, and has spray-painted murals all over the world in countries like Germany, Mexico, China, Malaysia, Japan and more. To see more of his work, visit his Facebook page. (His full-time website, www.IDrawALot.com, is down as of this post going live).

Karl's Spokane mural is expected to be completed some time towards the end of the week.

Are there solutions for Spokane County Jail overcrowding, cycle of "book-and-release" cases?

5 stories you need to know as you start your day