BY THE NUMBERS: Is there a "war on police"?


Last week, KXLY ran a story about a couple who followed Spokane County Sheriff's Deputy John McQuitty while he was on patrol during dark, early-morning hours. In an interview with reporter Jeff Humphrey, Sheriff Ozzie Knezovich said the couple's actions were dangerous, "especially in this day and age where, again, you have officers being executed."

A recent survey by Rasmussen Reports found that 58 percent of people polled believe there is a war on police today, and it's easy to understand why. In August, a Texas sheriff's deputy was shot in the back while gassing up his patrol car in a Houston suburb. Kentucky State Trooper Joseph Cameron Ponder and Louisiana State Trooper Steven Vincent were shot during traffic stops in the past two months. And two New York City police officers, Wenjian Liu and Rafael Ramos, were shot point-blank while sitting in their patrol car in December.

Washington state is no exception. In 2009, a man killed four Lakewood police officers while they met at a coffee shop before their shifts.

Indeed, law enforcement is a tough and often ugly job, and some police officers are killed simply because they're police officers. However, a deeper look at data on law enforcement deaths and assaults on police does not support the notion that there is a "war on police." In fact, since the 1970s, policing has become increasingly safer, and perpetuating the idea that police are under attack is dangerous, according to Washington Post blogger Radley Balko.

Balko lays out his argument in a recent post:


"When cops are constantly told that they’re under constant fire, or that every interaction with a citizen could be their last, or that they’re fortunate each time they come home from the job in one piece, it’s absolute poison for police-community relations. That kind of reminder on a regular basis would put anyone on edge. We’re putting police officers in a perpetually combative mindset that psychologically isolates them from the communities they serve. Incessantly telling cops that they’re under fire can condition them to see the people with whom they interact not as citizens with rights, but as potential threats. That not only means more animosity, anger and confrontation, it can also be a barrier to building relationships with people in the community — the sorts of relationships that help police officers solve crimes and keep communities safe." (the emphasis is ours)

Now let's look at the numbers:

Dan Wang, an economics and philosophy student at the University of Rochester and former assistant to Balko, has compiled data on the number of "felonious" police killings since 1961 from FBI Uniform Crime Reports. (Felonious killings are deliberate killings of law enforcement officers in the line of duty.)

Here are a few of Wang's graphs: 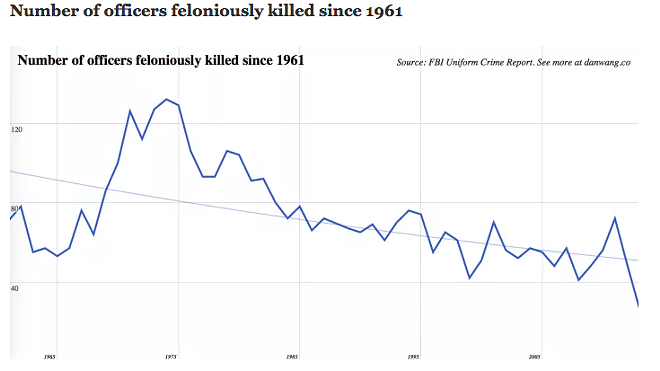 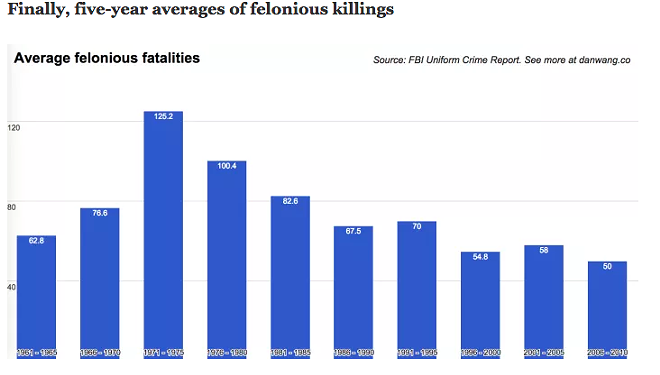 You can also look at Wang's raw data in a Google doc here.

And here's a chart from Seth Stoughton, a University of South Carolina law professor and former police officer, that shows felonious killings since 1970 (in orange) juxtaposed against murders in the general population (in blue).

@rcjparry @radleybalko Appreciate it! Keep in mind: murders only, not all violent felonies; no murder data for 2014 pic.twitter.com/F0ljAtBYrm


And here are graphs showing the rate at which officers were assaulted and injured from 1992 to 2012, via Daniel Bier, the founder and editor of the blog The Skeptical Libertarian:

Click here to see data that dates back to 1870.


A current police cadet attending an academy in a northern red state wrote an op-ed for The Daily Beast in which he too describes the dangers of the "war on cops" rhetoric, especially in police academies. The cadet, who authored the post under a pseudonym, writes that his instructors blame the Obama administration and the Black Lives Matter movement for inciting violence against police.

“Our instructor is likely trying to warn us to take heed of the dangers of the job, and not expect to be thanked by politicians for doing it. But he has made the government and the people we’re meant to serve out to be the boogeymen in the process.”

“But there is no War on Police. This Us vs. Them mentality still prevails even in fresh academy cadets. Perhaps some of these people will become future jackbooted, truncheon-wielding oppressors. Or perhaps they will encounter the reality that betrays the fear they are taught.”


Larry Wilmore says Fox News should take some of the blame:


Despite the numbers, the message seems to be taking hold. In May, Heather Mac Donald wrote an op-ed for the Wall Street Journal in which she argues the spike in crime is a result of "the intense agitation against American police departments over the past nine months." (Mac Donald also cites an 89 percent jump in murders of officers from 2013 to 2014; however, she fails to acknowledge the fact that the number of officers killed in 2013 was 27 — the lowest in decades and well below the national average of the past 34 years, which is 64.)

According to the Officer Down Memorial Page, which tracks law enforcement deaths throughout the country, 89 officers have died so far this year (two in Washington and one in Idaho). The total figure includes accidental deaths, heart attacks, gunfire, vehicle pursuits, assaults and more. So far this year, gunfire deaths are down 26 percent, and overall line of duty deaths are down 4 percent. By contrast, law enforcement has killed between 700 and 835 civilians (depending who you ask), a figure that is "almost double the highest number of police shootings ever reported by the FBI for an entire year," the Washington Post reports.