Catching up with Spokane UFC fighter Julianna Peña ahead of her Oct. 3 bout 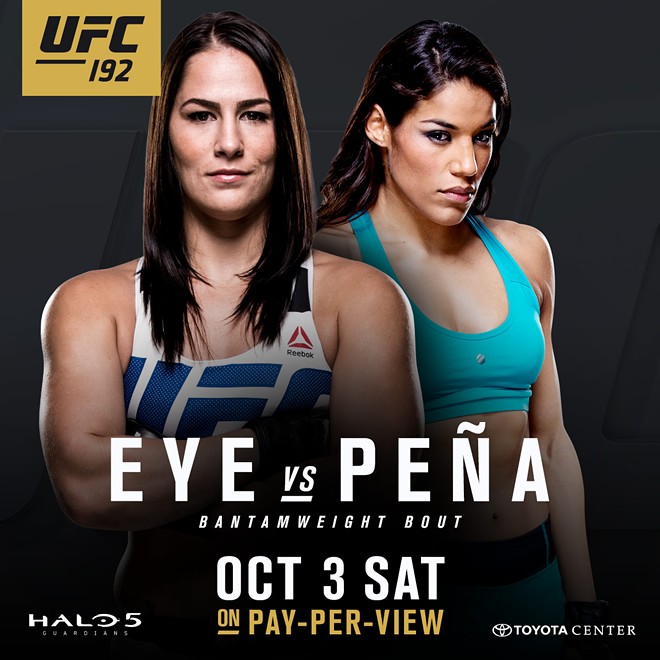 In just 11 days, Spokane-based Ultimate Fighting Championship athlete Julianna Peña will step into the octagon in Houston, Texas, to take on sixth-ranked women's bantamweight Jessica Eye. It'll be Pena's second match since she returned to the division earlier this year after taking more than a year off to recover from a devastating knee injury. In January of last year, Pena tore three of the joint's major ligaments during a practice session at her Spokane gym, Sik-Jitsu.

Peña has been openly vocal about getting a chance at taking down women's bantamweight champion Ronda Rousey, who's annihilated recent opponents in seconds. Many fans, MMA commentators and Peña herself believe the upcoming matchup against Eye is a proving ground, and that the UFC is setting her up to face off with Rousey in the near future.

A few days before she'll board her flight to Houston, Peña wraps her padded UFC gloves around her wrists and jumps into a grappling session with training partner and Sik-Jitsu teammate Marcos Lopez. Her movements on the mat appear effortless, even if it is just a practice round. In one swift movement, Peña slips a long leg under Lopez's knee and has him to the ground. She flips onto her back, finds his neck and quickly has him in a choke hold.

We caught up with Peña before this afternoon practice session to chat about the upcoming bout next weekend, Saturday, Oct. 3, at 7 pm, on pay-per-view.

INLANDER: You’ve been back to training for about a year now since recovering from your knee injury, and you’ve fought and won since. How are you feeling, physically?

JULIANNA PEÑA: Physically I feel great. You know, one of the things everyone was wondering is was my knee going to be able to hold up in the fight, and I don’t necessarily think I was worried about the knee holding up because I did everything that the doctors had required of me. I was just more concerned with ‘Gosh, it’s been more than a year — ring rust — do I still remember how to fight?’ Once I got in there and got the win, I realized I still have it. I got what it takes, and it’s going to take a lot more than a knee injury to get me out of this division.

Your stats are clearly ahead of your next opponent, Jessica Eye, and in your last fight you finished your opponent in the first round. How have you prepared in specific ways for your match-up with Jessica?
I have been working on closing the distance and making sure that she can’t get away from me. I’ve been working a lot in the clinch, and I’ve been working a lot of wrestling and takedowns. That’s kind of the name of my game anyway — to just grind them out and get them to the ground, and get the ground-and-pound and get the finish as fast as possible.

Ronda Rousey has beat just about everyone on the bantamweight division rankings between you and her. You’re up against the No. 6 ranked woman, and Ronda is fighting the No. 8 ranked woman [Holly Holm] about a month later. If you win this fight, do you think you’ll be next to go up against Ronda?
I feel like they can delay me as long as they want, but they can’t deny me, you know, and the facts are the facts. A lot of people don’t count my fights on The Ultimate Fighter as real fights — they call them exhibition matches — but I remember them as being real fist fights. As far as winning all those fights, I’m 5-0 and Ronda is 6-0, and when I win this fight I’ll be 6-0, too. There will be no other choice but to put me and her together, and that’s the only thing that makes sense in my eyes.

Ronda and Joanna Jedrzejczyk (UFC women’s strawweight champion) are on the main card for the next event after you fight, UFC 193, an unprecedented moment in the history of the sport. How does it make you feel knowing you’re part of the UFC right now as the women’s divisions are growing and gaining so much recognition and drawing so many fans to the sport?
I love it, you know. I’ve always been under the impression that anything a man can do, a woman can do better. And I think it’s great women are at the forefront of the sport. They’re headlining the cards, and they’re drawing a lot of attention to MMA and to the UFC, and I just feel so honored and blessed to be a part of that. I want to go down in history as a pioneer — as one of the toughest female fighters who walked the planet — and to be in this sport right now at this time is a pivotal moment for me to really influence a lot of women and to empower women.

If you don’t get the opportunity to fight Ronda next, which would be pretty surprising to your fans and to you, who would you want to be matched up against next?
No, no, I mean Ronda is the only person I see in my eyes. Other than that, I’ve always been under the mindset of I’ll fight whoever they want me to, as long as they give me the allotted amount of time to train for that opponent. So it doesn't matter who I fight. All these girls are trying to come in there and knock my head off my shoulders — they’re all tough — so whoever they want me to fight is who I’ll fight. But yeah, it would definitely make sense for me to fight Ronda next.

Considering you had an outstanding return to the division in April after recovering from such a severe injury, what do you hope to have accomplished one year from now?
In the next year I would like to fight for the title and win the title. If I can get that, I am pretty sure I’d retire and be the happiest clam you’ve ever seen. [Laughs] No, I’m kidding, I wouldn’t retire. I’d like to defend my belt. But yeah, I want to get the title shot and I want to win the title, and I want everyone out there to know there is no other female out there harder than me and that I’m the best female fighter in the world.

A few months ago the UFC made the switch to official uniforms from Reebok. How do you feel about the design, the style options, and the decision to not let fighters showcase their sponsors?
Well, I’m trying to pick up a sponsorship from Reebok. I think that it’s great they have a unified uniform, it makes the sport look more professional. When you watch NFL or NBA, they’re all wearing the same jerseys, so I think it’s one step closer making mixed martial arts and the UFC the most popular sport in the world. I think it’s very important to unify us as a whole.

What are your thoughts on the recent incident concerning UFC fighter Nick Diaz, who was banned from competing for five years by the Nevada Athletics Commission for testing positive for marijuana at UFC 183?
You know, if you’re going one mile over the speed limit, you’re still speeding. I think what they’re doing to him is a little excessive. I’m definitely for Nick Diaz, and to get those years taken off his career is totally uncalled for. I don’t believe that marijuana is a performance-enhancing drug, and coming from a state where it’s legal, I’m all for marijuana helping the body relax, dealing with social anxiety and to take away pain. I’ve never used steroids and it's unfair for people to use steroids and get a slap on the wrist for getting caught with that, but he gets caught with marijuana and they take five years. I think it’s completely unjustified and completely unfair and I completely support Nick Diaz and his movement, #FreeNickDiaz.

We both know a big part of this sport that gets fans excited is the trash talk between fighters leading up to bouts, and the feisty personas of the athletes, so what’s your best line to Jessica as the fight approaches?
I’d say ‘Fix your tits, bitch, let’s do this.’ [Laughs] I’m kidding. No, you know, I’m not into trash talk because I feel it’s not the martial arts’ Zen way. I believe ‘may the best fighter win’ and I just am going to do everything in my power to make it hard on her and to make sure that I come out the victorious one. She’s very impressive in her fights and I’ve been very impressive in my fights, so whoever gets there first is going to be the victor, and I’m planning on that being me.

How is the rest of your team doing lately? It’s been a pretty impressive year, with several other wins by the Sik-Jitsu team.
Elizabeth [Phillips] just had elbow surgery, she had a lot of built up cartilage broken off in her elbow, so she just had surgery and she should be back. She’s doing physical therapy and yeah, she’s my roll dog [training partner]. Sam [Sicilia] has a fight coming up in South Korea, and Mike [Chiesa] is co-main event in Vegas in December. Hopefully all of us can continue the streak this year. We’ve been undefeated as a team, and I think if we can finish out the year strong and still remain undefeated it would just be a monument for our gym and for putting MMA in Spokane and Sik-Jitsu on the map.