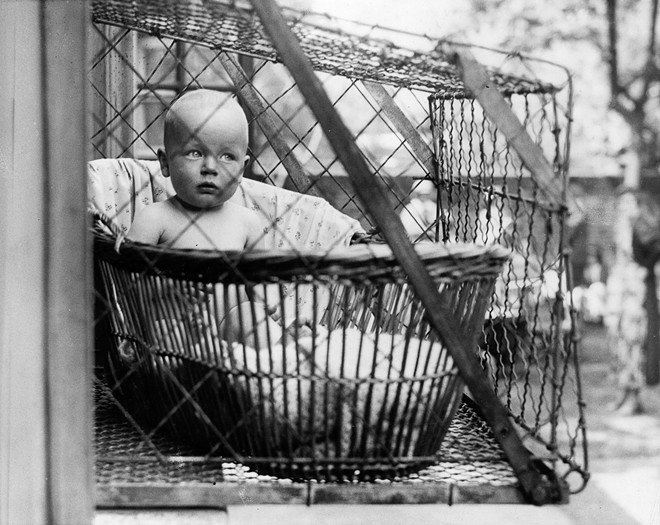 When your baby gets fussy, just set up the ol' baby cage...

Some discoveries stumbled upon inside the labyrinth abyss called the Internet are just so unusual and strange, one is instantly compelled to share. Enter today's weird discovery, courtesy of Mashable.com, but not a new blogopshere topic: the portable baby cage. This find is of the sort that peppers social media feeds on an occasional basis. Some blogger, like myself, chances upon such an oddity, and in marveling at the surprise such a thing exists, fellow denizens of the web are quick to follow with their own investigations. Suddenly, the word "viral" is thrown into the dialogue. Perhaps baby cages are old news — nonetheless, we hope it intrigues and amuses you.

Back in 1922, Spokane resident Emma Read was really worried about city-born babies, stuck inside stale-aired apartment homes and with no grassy yard to roll around in. So, why not build a box resembling a chicken coop, strap it to your window several floors above the street, and nestle your wee babe inside. Rock-a-bye baby, you know?

The concept didn't exactly take off (can you imagine the outcry if some mom decided this was a good idea today?!). No surprise, but there remain many black-and-white images of these baby cages in use in sooty London during the 1930s. Thankfully, we've since moved on from this arcane line of thinking that placing your baby in a rickety wire cage tens of feet over the street, in air that was probably polluted worse than people knew, was good and healthy.

And yet, quite unfortunately for local historical sleuths, information on Read's life and her patent is quite hard to find. In a 2013 piece musing on baby cages' absurdity, Spokesman-Review writer Shawn Vestal laments the lack of any firsthand information on Read in old newspaper archives. It is noted, however, that the original patent for the contraption is accessible, from which the following text was obtained:

It is well known that a great many difficulties rise in raising and properly housing babies and small children in crowded cities, that is to say from the health viewpoint. This is especially true with reference to babies and young children, who at present are being raised in large apartments, as a result not obtaining the proper fresh air, as well as being outdoors for such air and exercise. In crowded cities, where the houses and the front yards are small, there is no way for proper ventilation, while those living in apartments have no facilities whatever to permit the children and babies to receive proper fresh air from the outside. With these facts in view it is the purpose of the present invention to provide an article of manufacture for babies and young children to be suspended upon the exterior of a building adjacent to an open window wherein the baby or young child may be placed.

This emphasis on fresh air, as noted by Spokane historian Larry Cebula on a post in response to Vestal's piece on baby cages, was due to the popularly held belief — called miasma theory — of times past that communicable diseases were easily spread through "bad," stale or polluted air.
And that, dear readers, concludes our local history lesson of the day.