According to the bistro and martini bar's Director of Operations Casey Curtis, the new landing provides guests
click to enlarge 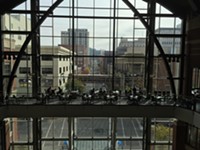 Max Carter
The view of the new "landing" at Twigs Bistro at River Park Square
with a fantastic dining experience and great views of the mall and the city of Spokane.

"The biggest change is the different sight lines and the views," Curtis said. "There are things that we're not used to seeing at Twigs, and now there are plenty of different spots you can sit in, not just on the landing. You can view into the mall, you can view out into downtown Spokane, and then as the holidays roll around, the tree will be right here as well."

Already a popular place to get a bite or have a drink, Twigs at River Park Square just stepped up their game big time. The restaurant is now open and fully operational, and the landing is available for seating on a first come, first serve basis.

Gonzaga's Kyle Wiltjer is CBS's preseason player of the year