Politics has long had whisper campaigns, with negative rumors — racial, sexual, criminal — spread secretly by campaigns. Of course, with the advent of the automated robocall, you don't need to be subtle about it anymore.

So it is with a recent robocall against Sandpoint mayoral candidate Shelby Rognstad. It warns Rognstad's support for high-density zoning will plunge Sandpoint into a crime-ridden hellhole of "undesirable elements." If that sounds a bit racist to you, let me assure you: It's more racist in context.

It also calls Ferguson, Missouri, a "violent jungle of looters and primitive destroyers."

Drawing on the full transcript from Better Idaho, I'll offer point-by-point context.  The narrator adopts a faux-deep sinister voice that sounds like a half-hearted parody of a negative campaign ad.
click to enlarge 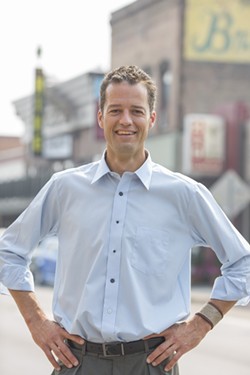 Shelby thinks you’re stupid. Now he’s out of job and needs a paycheck and he wants you to give it to him by letting him be mayor of Sandpoint.


I called up Rognstad to ask him about this. He's guessing that the anonymous caller is referring to the fact that about two months ago he closed the Common Knowledge cafe and bookstore that he owns.

"I'm running for this office and it will require nearly full-time dedication to this race," Rognstad says. And, yes, the economic reality was part of it. The business climate has changed in Sandpoint, he says. And that's a good thing. Where, at one time, a retail bookstore and café that serves organic breakfast and lunch was unique, lately other similar business have opened up. It's never easy to run a bookstore, especially if you have competition.

But it's not like he's unemployed. Rognstad still has Rognstad Enterprises (a real estate holding company) and Rognstad Capital (a private lending company) to keep himself occupied. Oh, yeah, and he's the Sandpoint city council president. So no, he says, he doesn't need the money.

"I could a job flipping burgers at McDonalds and make more money than running for mayor of Sandpoint," Rognstad says.


He changed our zoning plan to allow high-density, low income housing, proven to ruin towns by drawing in undesirable elements from the outside that turns towns in to crime ridden trash heaps.


Indeed, Rognstad says, he's been trying to drive more density in the city.

"It’s actually something I’m quite proud of," Rognstad says. "That’s the primary tool the city has to keep things affordable," he says.

Even before he was elected to the council, he was on the steering committee to update the Sandpoint comprehensive plan. "It’s the first time the city had reauthored the comprehensive plan since the 70s," Rognstad says.

Many of those changes were aimed at reducing sprawl and increasing density. They raised height limits, introduced mixed-use zoning to certain areas, and increased the allowable density in many lots. Developers even got incentives for creating residential units on top of commercial buildings in certain areas.

This, of course, can be controversial. The idea that high-density, low-income housing is "proven" to destroy towns is a pretty old fear. (Watch HBO's Show Me A Hero to get a sense of how hard a community might fight against housing units for poor people.) But just because a lot of people fear that, doesn't mean it's true. Many of the most thriving cities in the United States are high-density.

Experts have began to question that low-income housing has a negative effect. If there's any group that cares about low-income housing, it's the National Associations of Realtors. Property values are their livelihood. So they've studied this question. In fact, many studies suggest that not only has affordable housing often not lead to a collapse in housing values, in a lot of cases, housing values actually increased when affordable housing as added.

Now, you might be zeroing in on that phrase, "undesirable elements" and thinking that might be a racially charged one. Well, get ready for the next line of the robocall.


Just ask the people of Ferguson, Missouri, who in only 15 years saw a nice bedroom community turn into a violent jungle of looters and primitive destroyers that it is today.

You can draw your own inferences from that. Ferguson did see its African-American population increase significantly, but that hasn't exactly led to a community overridden with crime. That's not to say the community doesn't have problems. The Department of Justice, along with finding that Michael Brown probably didn't have his hands up when he was shot, found the local police force heavily discriminated against black people and put revenue over public safety.


Our town needs a real leader and protector, not a feminized male, SHEE-EH-LLLBY [in a mocking, falsetto voice as if to emulate a playground bully], whose so-called ideas are the same nonsense that is ruining California. SHEE-EH-LLLBY.

Rognstad isn't quite sure why he's being called a "feminized male."

"I don’t know if I can answer that for you, other than I had long hair. I think it falls in line with the general homophobic and racist tones of the message," Rognstad says. "I currently have short hair, by the way."


He’d be a joke if he wasn’t so dangerous. He wants to see Sandpoint to go from this sound: [country music. As David Cole from the Coeur d'Alene Press points out, the song appears to be Hank Williams, Jr. - "Country Boys Can Survive"] To this one: [rap music].

Shelby thinks you’re stupid. On Nov. 3 go and vote against SHEE-EH-LLLBY and stop him before it’s too late. This message paid for by Sandpoint United Against Shelby.

Rognstad also isn't sure why they're associating him with rap music over country music. He did, indeed, invest in The Hive, a local music venue, but they generally focus on New Orleans-style funk. The Hive did bring one hip-hop artist, Sir Mix-A-Lot ("about the white-est boy rap you could imagine," Rognstad says) but has actually booked country musicians more often.

The ads might violate Idaho law, but Rognstad doesn't know who put it out. "My opponent claims no responsibility and claims he had no idea who did it," Rognstad says. "And I have no reason to doubt him. He’s a really nice guy. It’s obvious to me that it reflects a lot more poorly on his supporters than it does me."

"I want to be careful not to pigeonhole Sandpoint as this hub of racism and bigotry," Rognstad says. There is a small vocal group, he says, but suggests that North Idaho residents who hate minorities are, well, a minority.

Ultimately, Rognstad thinks this will actually be a good thing for his campaign. "If anything it motivates my base to take this election more seriously," he says.

How Donald Trump is a lot like your drunk neighbor