Is it racist? Is it safe? Is it funny? and other questions of the day 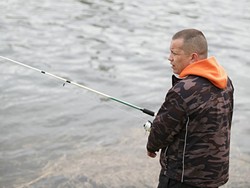 Listen to this robocall against Sandpoint mayoral candidate Shelby Rognstad and tell us: Is It Racist? (Hint: Yes.) It's one of the few negative campaign tactics in Idaho, I assume, to focus largely on California and Ferguson, Missouri.

A Spokane police officer who was charged with domestic violence — specifically, of trespassing by pushing his way into his girlfriend's home and yelling at her that she was a "slut" while armed with a .38 revolver — is back on active duty, ready to Protect and Serve the Public.

Jaime Pendleton, of Date Grape infamy, is facing charges for felony grand theft for stealing an ATM card. And, for the record, jokes about him getting in prison are NOT funny.

Can NATO, that scrappy band of Boy Scout do-gooders, band together to stop neighborhood Putin? The New York Times explores the question.

Kevin McCarthy, whose big mouth on the Benghazi committee handed Hillary Clinton a big campaign ad,  has dropped out of the Speaker of the House leadership race. He was widely expected to win. So what happens next?